CALGARY – Beef is king at the Calgary Stampede. And its crown certainly got a good polish during Centennial year.

Beef cattle have played a vital role in the Stampede for a full century. And with nearly 40 per cent of the Canadian herd situated in Alberta, the Stampede places a particular emphasis on illustrating the industry’s meaningful impact on Wild Rose Country. 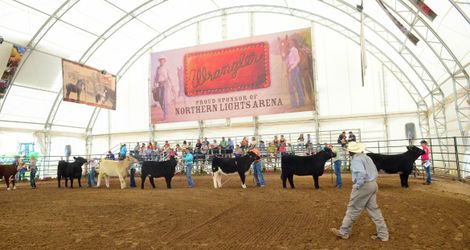 “I’d call this year an overwhelming success,” said Bob Park, who chairs the Stampede’s Beef Cattle committee. “There’s a true curiosity among the public. They want to see live beef cattle. We gave them that and much, much more.”

In only its second season of existence, the Stampede’s Cattle Trail exhibit proved a runaway success. An engaging, interactive presentation of the beef cattle industry from pasture to plate, the Cattle Trail details the industry’s attention to safe food production standards, environmentally sustainable practices, traceability, and animal welfare. The Cattle Trail clearly struck a chord with the Stampede’s international crowd in 2012, attracting an estimated 112,000 visitors through its 10-day run.

“We gave a very large group of people a whole new appreciation for what a cattleman goes through to bring a calf to harvest,” said Park. “The beauty of the Cattle Trail is that people get the straight answer, right from the people within the industry, on subjects such as best practices, sustainability, traceability, and how the animals are being cared for.”

The 30th annual UFA Steer Classic, held on Saturday, July 14, continued its recent pattern of steady growth, with 129 entries from five Canadian provinces and one American state. John Nostadt and Martin Koyle of Maidstone, Ont., took top honours with a 1,324-pound crossbred steer. The duo collects $10,000, plus another $1,000 for victory in the Open class — and as part of a long-standing tradition, that steer has been purchased by Zen 8 Grill, most likely for its annual Champion Steer Dinner fundraiser in the fall. Dakota Townsend, 16, of Sylvan Lake, Alta., enjoyed an even bigger pay day at the UFA Steer Classic. She collects $4,000 as overall reserve champion — plus another $10,000 for victory in the Hereford breed class. That extra windfall comes as a result of generous sponsorship by the Canadian Hereford Association, in recognition of the 16th World Hereford Conference being held in southern Alberta.

The second annual Junior Steer Champion Auction, which immediately followed the UFA Steer Classic, saw the grand and reserve champion steers from the Junior class — owned by Chase Miller of Cremona, Alta., and Kathryn Dolliver of Stettler, Alta., respectively — go under the gavel. Money raised at the auction goes toward a self-sustaining Stampede post-secondary scholarship fund. The second annual Jackpot Heifer Show, held on Sunday, July 15, was won by Cassidy Matthews of Olds, Alta., while Miller claimed the reserve championship.

“We use the UFA Steer Classic as an educational tool for the urban public, to let them know that the quality of Canadian beef is world-class,” said Steer Classic committee chair Don Miller. “And this event attracts breeders and cattle people from all over. It’s got a tremendous following among both purebred and commercial cattle breeders who want to see how things turn out.”

Meanwhile, 22-year-old Brennin Jack of Weyburn, Sask., captured the Stampede’s 24thInternational Livestock Auctioneer Championship held Saturday, July 14 under the Big Top — becoming the first Saskatchewan auctioneer to be fitted for the ILAC crown, as well as the youngest winner ever of the Stampede auctioneers’ showdown. Jack, a former Stampede rookie-of-the-year, beat out 23 other hopefuls in the two-day competition. He takes home about $5,500 in cash and prizes, including a Stampede buckle and a champion’s jacket sponsored by past winners, and earns an automatic berth into the 2013 World Livestock Auctioneer Championship at Montgomery, Ala.

“To me, this was one of the tighter contests we’ve ever held,” reflected International Livestock Auctioneers committee member Dan Skeels. “There are years where you could say somebody’s really stood out, and won hands-down, but honestly, before I got the results and announced them, I didn’t know who was going to win it.”