CALGARY – A horse is a horse, of course, of course. But there’s something special about horses and the Calgary Stampede . . . especially when it’s a once-in-a-lifetime show like the Stampede’s Centennial. 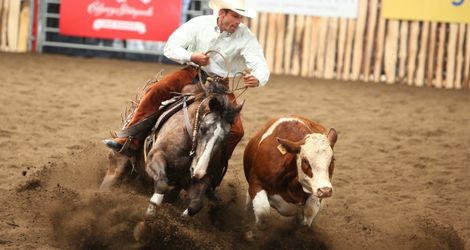 “We saw an increase in our entry numbers for all our events. There was excitement surrounding the Centennial Trophy Saddle program, because that’s the first such program we’ve had at the Stampede. Just being part of Centennial year was a big thrill. And, as always, people love competing at Stampede,” said Hans Kollewyn, who chairs the Stampede’s Western Performance Horse committee. “Competitors are able to show off their horses and skills in front of a big crowd; they don’t experience that at most shows.

“And overall, the scores we’ve seen are telling it all,” added Kollewyn. “They’re really reflecting the skill level, the horsemanship, and the overall quality of competitor that we’re attracting.”

The Stampede’s Elite Western Rider Award, presented by Parsons, was introduced in 2009 to honour rider excellence and versatility in the Western Performance Horse Arena. Competitors earn points toward the title with Top-10 finishes in at least two of the three WPH events, with the winner receiving a coveted Stampede buckle.

This year’s winner is a familiar one – Brad Pedersen of Lacombe, Alta., the last competitor to have his name etched on the Elite Western Rider Award hardware back in 2010. Pedersen and Smart Sassy Date, owned by Greg Gartner of Sherwood Park, Alta., won the Open Bridle class at the Working Cow Horse Classic on Sunday, July 15 under the Big Top. Pedersen was also ninth overall aboard Smart Koki Joe, owned by Don Halladay of Rocky Mountain House, Alta., in the Open division of the Cutting Horse Competition on Thursday, July 12 under the Big Top.

“It’s an honour to win it. It’s always tough competing in two events,” said Pedersen. “We’ve been down here since Tuesday, and it was a tough, hot week.”

The Team Cattle Penning Competition, presented by Calfrac Well Services and held in the Scotiabank Saddledome, was inundated by a record number of teams — 764 — from across the continent vying for Stampede glory and nearly $400,000 in prize money.

In the Open Class, Oklahoma’s Lesh brothers — Joel and Jordan, both of Stillwater — became repeat winners in the class, teaming up with Pat Bolin of Stettler, Alta., for a $13,248 pay day on Sunday, July 8. In the 14 Class, the 21-year-old Armstrong twins, Justin and Graham, of Armstrong, B.C., emerged the winners alongside Wim Van Der Poel of Okotoks, Alta., on Friday, July 6, divvying up a cheque for $22,374. A trio of gals from Langley, B.C., Taylor Sinclair, Debbie Molnar, and Sandy Price, triumphed in the 10 Class on Saturday, July 7, collecting $43,365. The 7 Class, meanwhile, featured Alex Hansen of Chestermere, Alta., Ben Thorlakson of Carstairs, Alta., and Bruce Stewart of Cochrane, Alta., in the winner’s circle on Monday, July 9, a win worth $39,396.

During the Stampede’s 40th annual Cutting Horse Competition, a participating event on the National Cutting Horse Association’s Mercuria/NCHA World Series, former world champion Chubby Turner of Weatherford, Texas, showed ’em how it’s done under the Big Top. Turner, a lifetime director and past president of the NCHA, marked a 224 aboard CD Boonsmal in the Open class final on Thursday, July 12, earning a paycheque of $10,200. Carol Ward of Rancho Murieta, Calif., and her steed Lil Dulce Lu scored a Stampede repeat win in the Non-Pro class, posting a 220.5 in the final to earn $8,725. Haylee Sleeman, 12, of Yelm, Wash., prevailed in the Youth class on Kit Date, capturing the Bill Collins Youth Excellence Award and a $1,500 scholarship for a two-day aggregate score of 426.

Pedersen claimed the marquee Open Bridle class at the Working Cow Horse Classic, a victory worth $3,375, with a two-day, dual-judged aggregate score of 593.5. John Swales of Millarville, Alta., and Shining Peptolena, owned by Calgary’s Ron Stuckert and Diana Runge, captured the Open Hackamore category with an aggregate of 592, reaping a $3,690 windfall. Meanwhile, Suzon Schaal of Millarville, Alta., and her own steed Genuine Brown Gal continued their domination of the Non-Pro Bridle class, marking an aggregate of 595 for a $2,310 pay day.

The Stampede’s Heavy Horse Pull attracted 26 teams from as far afield as Oregon, Michigan, and Ontario during the final three nights of the 2012 Stampede — with the hat-trick winners from each of the past two years waging a teamster war under the Big Top. Dennis Weinberger of Cochrane, Alta., the first triple-crown champion of the Stampede’s Heavy Horse Pull back in 2010, won the lightweight division on Friday, July 13. Randy Dodge of Albany, Ore, who countered by winning the Stampede trifecta in 2011, struck back on Saturday, July 14 by claiming the middleweight division. And on Sunday, July 15, the equine bulwarks of the heavyweight division settled the score — as Weinberger’s duo of Jesse and Sam won the evening, then established a new outright Stampede weight record of 13,400 pounds for good measure.

The Country Lane Belgians wagon from Sunderland, Ont., captured its second career World Champion Six Horse Hitch Competition in the Saddledome on Sunday, July 8 from a field of 15 rigs, cashing a cheque for $10,000. The pinnacle of the Stampede’s four-day Heavy Horse Show, presented by Halliburton, the World Champion Six Horse Hitch Competition features the gentle giants of the equine world stepping in time to live music performed by members of the Calgary Philharmonic Orchestra.

Local hero Jim Anderson of Strathmore, Alta., was the winner of the third annual Cowboy Up Challenge in the Saddledome on Monday, July 9. Anderson and Picasmokenlittlelena topped a field of 10 Canadian and American finalists by deftly negotiating a very challenging obstacle course, earning $7,000 plus another $1,000 for their win in the second preliminary round on Sunday, July 8.

Horse Haven, presented by TAQA, featured 18 breeds of light horses that live and thrive in Alberta, with 10 days’ worth of exhibitions and presentations in the Agriculture Building, the Big Top, and the Northern Lights Arena.