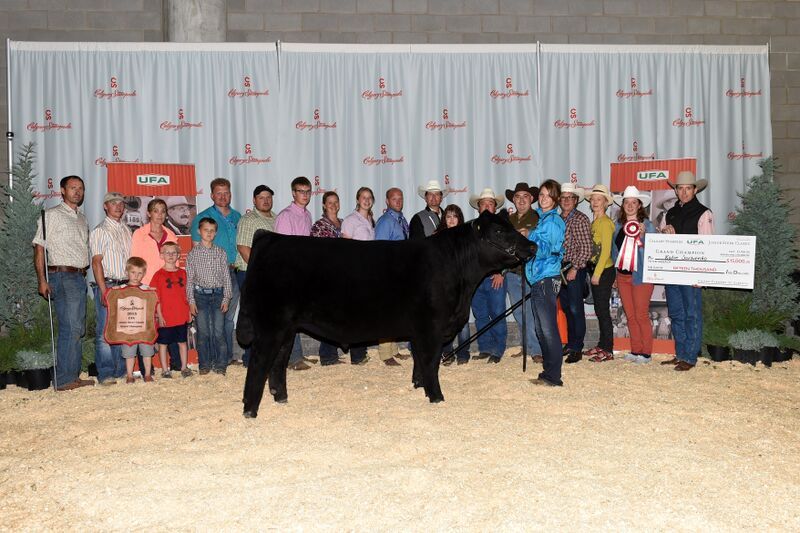 Calgary – A large percentage of all the beef cattle in Canada can be found on Alberta pastures and feedlots. Beef cattle are a vital part of the province’s economy. The Stampede is certainly a great show, but it also serves as something of a bridge, linking the urban beef consumer to the industry producing that food.

The livestock industry is multi-faceted. A vital, but sometimes overlooked, link in the chain that brings beef from the pasture to your plate is the livestock auction. The first round of the 2015 Stampede International Livestock Auctioneer Championship was held in Olds on July 10th and 27 of the world’s best auctioneers went through their paces vying for one of the top ten finalists’ spots.  On Saturday, the top ten moved into the finals in the Agrium Western Event Centre. Marcus Kent of Dunnellon, Florida, in his first attempt on the ILAC championships, emerged the winner by .333 points over Mike Nuss of Minatare, Nebraska.

This year the UFA Steer Classic became the UFA Junior Steer Classic, putting the focus squarely on the coming generation in the livestock business and changed from a show based on breeds to one with weight classes. On Sunday, July 12th, the entry of Katie Serhienko of Maymont, SK was declared Grand Champion and also first in Group Nine.  The victory earned Serhienko a scholarship of $10,000. The winning steer was then auctioned off for a handsome $24,000. The proceeds of the auction go to a self-sustaining Stampede post-secondary scholarship fund.

Another major Stampede initiative to reward rural youth is the International Youth Livestock Scholarships. This year over $70,000 worth of scholarships and prizes were awarded to 55 of agriculture’s most promising young people.  Five International Youth Livestock Supreme Champions, displaying exceptional conformation and presentation of their respective species projects, were named on Sunday, July 12th.  Shannon McLaughlin was the Supreme Sheep Champion, Tyson Reitveld was the Supreme Dairy Champion, Cole McMahon is this year’s Supreme Commercial Beef Champion, Dakota Townsend won the Supreme Purebred Beef Champion’s title and Caitlin Malterer is the Supreme Equine Champion.

The Cattle Trail exhibit is a sequence of displays telling the story of the beef industry.  Over the course of the Stampede, thousands of urbanites were able to gain an understanding of how the food they eat gets to the meat counter at Co-op. Showcasing the emphasis put by the industry on safe food production standards, environmentally-sustainable practices and animal welfare, the Cattle Trail was not just educational, but also a pretty entertaining place to take the kids.

Farmers and ranchers labour in obscurity, a long way from the people who consume the product of those labours. The Cattle Trail lets those consumers gain some insight into the practices and concerns of the beef industry and the people who make it work.