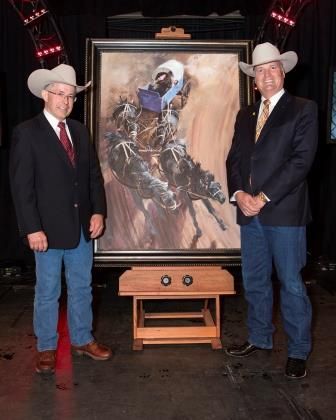 Calgary – The Calgary Stampede revealed the stunning artwork for the 2015 Calgary Stampede poster at tonight’s Canvas Auction. The annual auction of chuckwagon tarps for advertising, proved to be a suitable venue for the chuckwagon-themed piece. The artwork pays homage to the chuckwagon drivers and horses that have been an integral part of the Stampede for 91 years.Calgary Stampede vice-chairman of the board, Bill Gray, retained the services of artist Oleg Stavrowsky to create the masterpiece.

“This year, I wanted to insert some action into the poster—and nothing speaks of action more than the chuckwagon races,” says Gray. “The chuckwagon races have been a part of the Stampede since 1923 and are one of the most exciting events during the 10-day Stampede. To capture this iconic event, I chose an artist who has a particular talent for bringing his subjects to life.” The commissioning of the potential artist is the official duty of an incoming president. Gray will become Calgary Stampede president and chairman of the board in March 2015.

Stavrowsky’s original artwork depicts the thundering chuckwagon races of the Calgary Stampede. The incredible detail in the piece was achieved through Stavrowsky’s three-part process. Initial pencil sketches were completed then he built a wooden "scale model" of wagons for an accurate reference for the painting. The figures and horses in the piece are painted from life, real horses and real people.

“Being granted the opportunity to create the artwork for the 2015 Calgary Stampede poster was an honour,” says Stavrowsky. “Western art is my passion; there are so many aspects of western heritage that I could capture. I chose to paint the chuckwagon to represent the spirit and the action of the Calgary Stampede.”

Stavrowsky, an American born artist, came to realize his love for western art, following a visit to the Cowboy Hall of Fame in Oklahoma City in 1969. “My passion for painting has since become my life, income, joy, my everything,” says Stavrowsky. In August of 2013, Stavrowsky was one of the first artists to become a member of the Russell Skull Society of Artists, a new elite group of contemporary western artists.

The Calgary Stampede has been creating posters for more than 100 years. Although they have now become a collectors piece, they were originally used as the primary form of promotion for the event.