The 32nd annual Calgary Stampede Cutting Horse Futurity, presented by Wrangler, took over the Corral on Stampede Park from October 10 to October 14.

With an annual prize purse of more than $300,000 — including $100,000 in added money this year — the Stampede Futurity represents the premier cutting event in Canada. The 2012 Cutting Horse Futurity had a total of 267 total entries, including entries from Texas and Ontario. 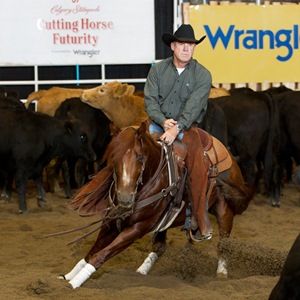 Cutting horse competitions got their start in the Wild West, where a good cutting horse was invaluable to cowboys when they were chasing cattle and trying to separate certain animals from the herd to vaccinate or brand. Today, cutting is one of the world’s fastest growing equine sports with competitions all over North America.

The Stampede Futurity showcases the pure athleticism, instinct, agility and intelligence of the cutting horse. The horse-and-rider teams attempt to cut at least two, and most often three individual cows out of a herd within 150 seconds.

A panel of three judges scores contestants based on the horse’s instinctive reactions, the challenges made by the cows cut and any errors in judgment.

This year’s Stampede Futurity also offered an extra incentive, with the final seven Centennial Trophy Saddles awarded to the Open and Non-Pro champions in each of the Futurity, Derby, and Classic/Challenge classes, as well as the winner of the Non-Pro 7-Up class.