The Calgary Stampede recently acquired a very rare pennant that was one of the original souvenirs sold to visitors at the 1919 Victory Stampede. An astute local collector, Brian Freed, found this rare piece of Stampede history at an auction in Calgary. Within a few days he contacted the Stampede Archives as that is where he believed the pennant should reside.

The 1919 Stampede, held at the Exhibition Grounds from August 25 to 30, was a celebration of the end of the Great War and a salute to the young men who had so courageously served on the European front. The armistice ending the fighting went into effect at 11 a.m. on 11 November 1918, but it would be several months before all the soldiers returned to Canada.

Inspired by England’s lead to hold a Peace Festival, in early 1919 Ernie L. Richardson, the Secretary of the Calgary Exhibition, approached the Big Four - Pat Burns, A.E. Cross, George Lane, and Archie J. McLean – to see if they would sponsor another Stampede.  The excitement and success of the 1912 Stampede in bringing people together from all over Alberta had remained with these individuals, but there was only one person that could pull it together on such short notice: Guy Weadick. But was he available and could they find him?

When Guy Weadick did not get Calgary’s support to make the 1912 Stampede an annual affair, he went elsewhere with his entertaining program: first to Winnipeg in 1913, overseas to England for a couple of years and then back to New York in 1916.  In spite of these travels, one member of the Big Four had kept in touch with Weadick over the years, and thus George Lane was able to find and meet with Weadick in Spokane, Washington, to negotiate a contract to stage Calgary’s second Stampede, much along the lines of the 1912 one.

Events included bareback and saddlebronc riding, bulldogging, steer roping, steer and bull riding, fancy roping and trick riding, relay races, Indian races, the pony express race, and Roman standing races among other events. All too soon the exciting six day celebration was over, and when the tally was in, some $25,000 had been distributed to the competing cowboys and cowgirls in the day money and finals. Some 57,456 people enjoyed the Victory Stampede but even with the charge of $1 for the admission to the Exhibition grounds and an additional 50 cent charge for a grandstand seat, it was not quite enough to break even. The biggest disappointment was not having any profits to distribute to The Great War Veteran’s Association, The Salvation Army or the Y.M.C.A, but in spite of this the Victory Stampede was a success in the eyes of most citizens. 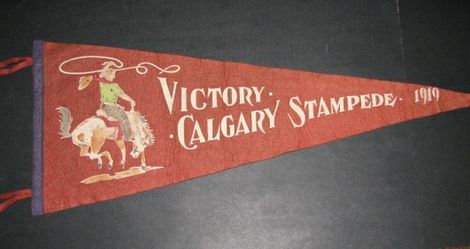