A strong showing for Albertans at the Calgary Stampede Cutting Horse Futurity, presented by Wrangler 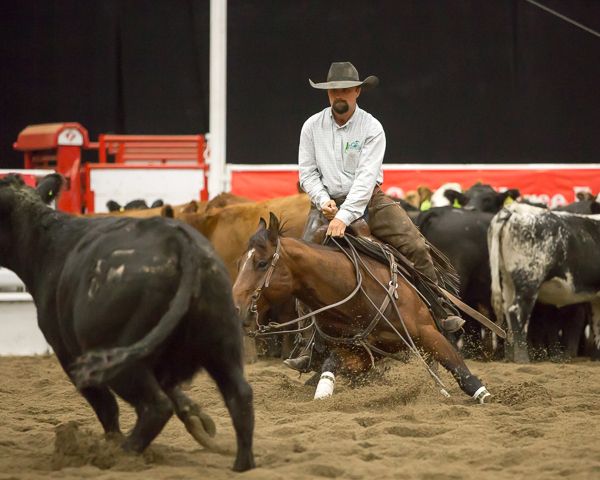 A strong showing for Albertans at the Calgary Stampede Cutting Horse Futurity, presented by Wrangler

Calgary – Horses and riders from Alberta showed their strengths among a big North American field this past weekend at the Calgary Stampede Cutting Horse Futurity, presented by Wrangler.  More than 240 horses from across Canada and the United States were entered in the prestigious event, which took place at the Agrium Western Event Centre October 14-18.

Doug Reinhardt, an Irricana-based trainer, is one of the Albertans who saw success at this competition.  He took the Reserve Championship in the Open Derby on Hi Lights, owned by Pauli Smith of Manyberries Alberta.  Reinhardt says as he works with horses he always has his eye on this competition.

“You’ve got to peak them at the right time,” he says, adding “you want to peak them for Calgary.” Reinhardt’s hard work also paid off with several other top ten finishes.  But he says any success in cutting is always thanks to a horse with great instincts and drive. “It’s the most natural of all the horse events. Once you put your hand down, if the horse doesn’t want to cut he’s not going to cut.”

Throughout the five days of the Calgary Stampede Cutting Horse Futurity, crowds at the Agrium Centre were treated to amazing competition in seven events, both open and non-professional.  With prize money of over $375,000 up for grabs, competition was fierce, and results in many of the events were extremely tight.  In the Open Classic Challenge, a tie resulted in Dustin Gonnet of Cayley, Alberta on SDP Overdrive being named co-champion with Brian Anderson of Idaho Falls, Idaho on Sues Last Time.

“It’s exciting to see all the things that we have been planning for months come to fruition,” says Angela Pipe, Chair of the Western Performance Horse Committee.  Pipe admits it was fun to be able to try some new things this year, like the celebrity cutting competition, and gives credit to a strong team of volunteers for making the entire event a success.  “We have so many volunteers working on this that are dedicated and passionate about both the Stampede and the sport of cutting,” she says, adding “The cherry on top is having the opportunity to showcase the best of the best in the Agrium Western Event Centre.”