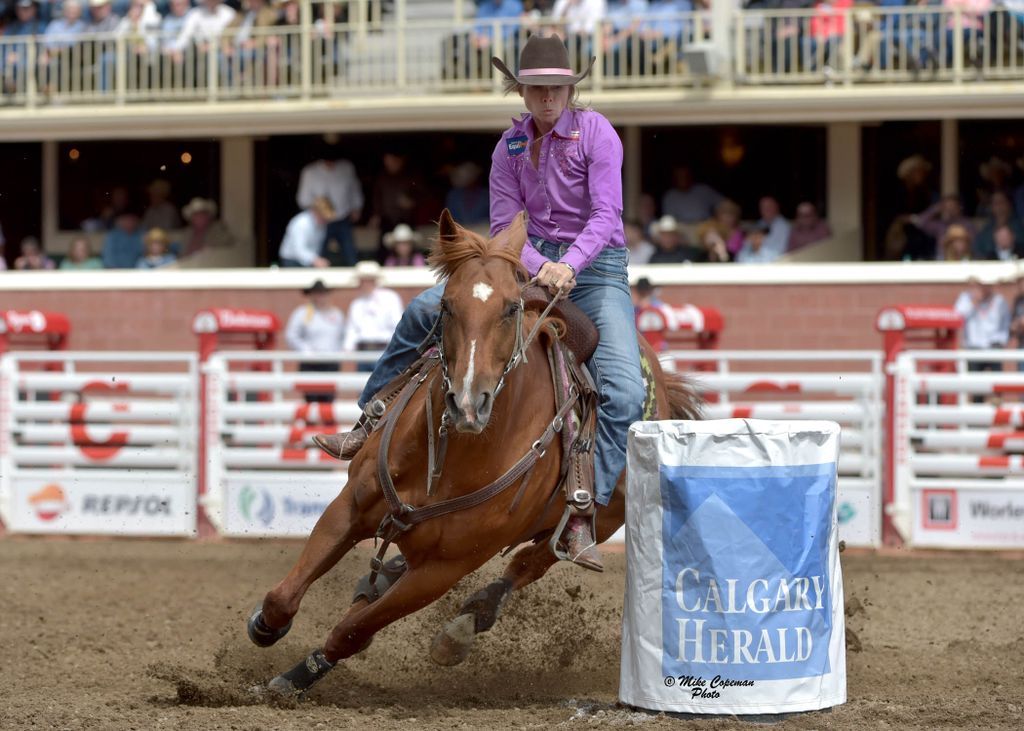 Calgary - Winning a Calgary Stampede bronze trophy is quite a thrill, and a couple of Wednesday’s rodeo contestants managed to collect their very first one.

It was an extra special moment for Alberta barrel racer Nancy Csabay, after she completed her speedy 17.56 second run.

“My Dad actually made the (championship) bronzes for the barrel racing and the bulldogging one year here, so it’s really special. Calgary was always a big deal for my Dad, and it’s the same for me too,” said the Taber cowgirl.

Along with being an accomplished bronze artist, the late Arnold Haraga was a Canadian steer wrestling and All-Around champion. He’d also claimed the steer un-decorating event (forerunner event to steer wrestling) at the Calgary Stampede in the 1960’s.

“I’ve got his Calgary Stampede trophy. That was his prize trophy.”

As a breast cancer survivor, Csabay appreciates every rodeo day.

“My whole purpose of life is to live in the moment. My whole goal in life is to be present. I’m on to the next run for tomorrow. I have a game plan before I start, but I’m in the moment every time I’m riding in that arena.”

The win bumped Csabay’s Pool B account to $9000, which is just behind leader Lisa Lockhart and her $9500 total.

It would be hard to find a cowboy more excited than Utah saddle bronc rider Jake Wright, after his 85.5 point ride on Major Cover gave him the Day 6 victory.

“I’ve been waiting,” he bubbled. “I’ve been saying for the last three years I’m going to get one of those statues. Finally, I got ‘er done. I couldn’t be happier.”

Wright now has $7000 in Pool B, the same as Zeke Thurston, after their second day of riding. But they’re chasing two-time Stampede winner Wade Sundell, who’s already collected $8000.

Make it two in a row for PBR superstar J.B. Mauney. He’s already a two-time winner of the Calgary Stampede bull riding championship and on Wednesday he collected his second go-round bronze of 2016. He was even a point better than the day before, spurring out an impressive 89 on board the Kesler bull Flight Plan.

“He felt pretty good,” said Mauney. “He kind of got me rocked to the outside, and really went to whipping around there, and I kind of had to make some bigger moves than I was needing to. But I got my butt back to where it needed to be, and it worked out.”

Louisiana steer wrestler Casey Martin was fast man of the round, tipping his steer over in just four seconds flat. The $5500 went nicely with the second place money he picked up the first day, giving him the Pool B lead with $10,000.

Talk about fast hands! The Stampede arena speed record in tie-down roping (6.6) was threatened by 2012 Stampede Champion Cory Solomon of Texas Wednesday afternoon. His run was a blur in 6.7 seconds, and while the record stood, the go-round money ($5500) fell Solomon’s way.

“Knowing those guys are behind you, you can’t hold anything back,” said Solomon, who’s now third place overall. “You have to take chances here in order to win first, and I took one and it worked out.”

Solomon’s mentor Fred Whitfield placed in the round again, so he’s the Pool B leader with $8000.