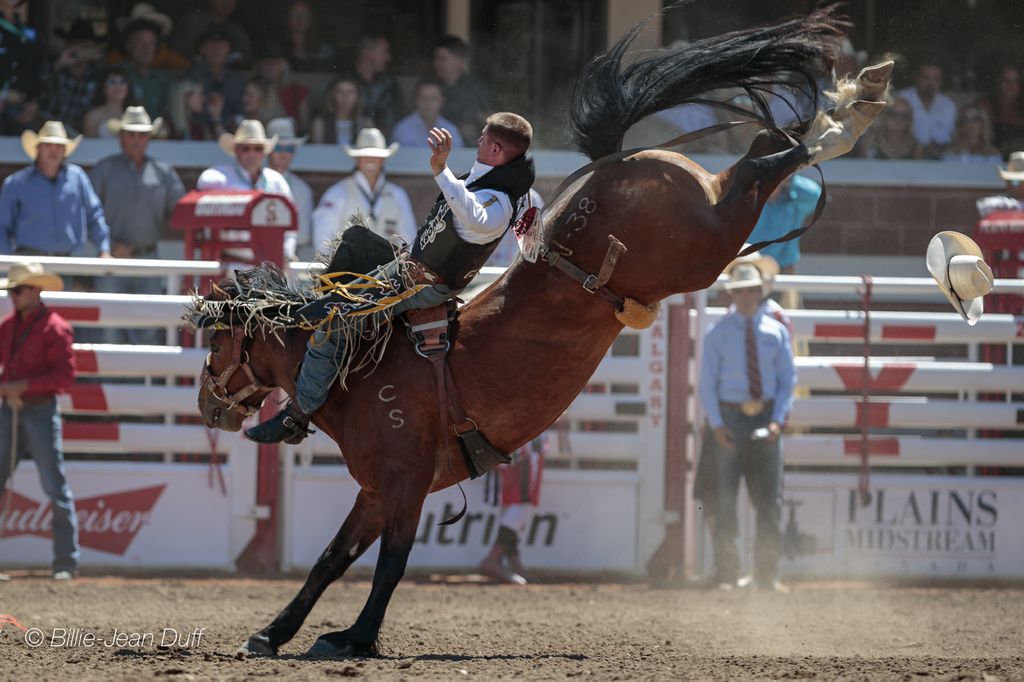 “I’ve seen him his last few trips and he’s just been a nice little horse, usually takes a little scoot, just jumps and kicks,” related Vold, a three-time Canadian champion. “So I pulled a loose rigging today, just to try to help him out, and man, did he come unglued, and bucked! I had my hands full. I just kept scrambling. It all worked out in the end, but I wasn’t really sure what was going to happen.”

Another Stampede competitor coming off the disabled list is Airdrie-raised Jordan Hansen. Hansen was out with fractured vertebrae and hip, and his return was just in time for the Stampede.

“Two days ago, that was my first bull back from the two and a half months I was sitting off,” said Hansen. “These last couple days, I felt pretty slow and weak, that’s for sure. I felt like I haven’t been on in a while. I’m sure glad I could turn it around today.” Turn it around he did, when he sat firmly in the middle of the spinning Vold bull called Blow Me Away, for 87 points.

Of the four qualified bull rides on Sunday, Ty Wallace’s came in with the same mark as Hansen’s. So the Colorado cowboy and Hansen shared the first and second place purse, giving them $5000 apiece. Joe Frost remains the leading earner in the Pool A bull riding standings, with $9500, followed by Wallace and Cooper Davis, who have $7500 each.

Kyle Irwin hadn’t found his way to the pay window Calgary yet, but he changed that in 4.1 seconds, wrestling his way to first place Sunday in the steer wrestling.

“It’s always good to come up here and do good,” grinned the cowboy who hails from Robertsdale, Alabama.  “So to strike and win first is good, it’s real good.” The $5500 paycheque puts Irwin into the mix in the Pool A race, where the top four advance directly to Sunday’s Finals. He needs to make up some ground yet, because leading the charge still is Cody Cassidy with $9500, followed by Tyler Waguespack with $9000.

For the second straight day, Texan Cade Swor came out and caught and wrapped a calf flawlessly. His time of 7.1 seconds was best again, so he got himself another go-round trophy bronze and $5500 more in the tie-down roping.

“That’s kind of different for me around here,” claimed Swor. “I haven’t won many firsts, and two days in a row, man, that’s pretty cool. I couldn’t be more happy with the way things are going.” Swor now has $11,000 in the tie-down roping Pool A but he shares top spot after three days with fellow Texan Cory Solomon who has the same total.

He may be a veteran of saddle bronc riding, but he rode like a kid on Sunday. Cody DeMoss made headlines when put together an 87.5 point ride with Calgary Stampede horse Xecutive News, earning his first paycheque of the week.

“He was just outstanding,” drawled the Cajun cowboy from Louisana. “He was fun to ride, really jumped up in the air and allowed me plenty of time to set my feet, get my toes out, and it was fun!” Isaac Diaz continues his roll at the Stampede despite his sore ribs, placing in the round again. So he leads Pool A saddle bronc standings with $11,500, with Nanton’s Clay Elliott in next with $10,500.

Kelly Bruner may be a newcomer to the Calgary Stampede but she hasn’t had any trouble finding her way around the barrel pattern of the infield with her gelding Suzy. They won Sunday’s round with a time of 17.43 seconds.

“I left him alone, and let him do his job for a change,” she smiled. “And he did great. He didn’t need me up there!” Bruner, from Texas, has placed in every go-round and she shares the Pool A lead with Ivy Conrado. Both have collected $13,500 so far. Monday is the last day for Pool A competitors to try to secure a bye into Sunday’s Finals, with the rest given one more chance to be there through Wildcard Saturday.