Calgary – The Calgary Stampede Foundation has received the largest individual donation in its history from local philanthropist, Don Taylor. Taylor’s $15 million donation is directed to the development of the SAM Centre, an integral component of the Calgary Stampede Foundation’s new Youth Campus. The SAM Centre will be the new home for the Stampede’s archives and Foundation’s Stampede School program and will house new permanent and temporary galleries - all of which celebrate western heritage and commemorate the history of southern Alberta. 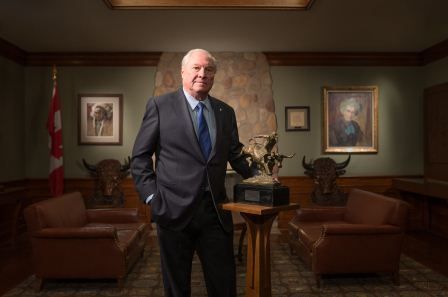 “It is my hope that the SAM Centre will capture Calgary’s unique spirit, share the stories of local trailblazers and celebrate the traditions of our past,” said Taylor. “It is an honour to name this centre after my father, Robert Samuel Taylor, who was committed to helping build the Calgary we know and love today.”

The funds raised through the campaign will be allocated to the development of three main Stampede Park community initiatives and evolve Stampede Park into a world-class, year-round community hub located in the heart of Calgary. The Stampede’s new community projects include: Youth Campus, a creative centre that will house Stampede School, The Young Canadians School of Performing Arts, Calgary Stampede Showband, Calgary Arts Academy, and other groups from across the city; Riverfront Park, a new public park along the Elbow River; and the Agriculture Discovery Zone, a space dedicated to showcasing the agricultural community, featuring the Agrium Western Event Centre.

To date the capital campaign has raised more than $89 million. Development of park projects is currently underway with the Agrium Western Event Centre scheduled to open in June 2014, Riverfront Park in 2015 and Youth Campus in 2017.

For more information on the “We’re Greatest Together” Capital Campaign, please visit www.stampedefoundation.com

About the Taylor Family Foundation

The Taylor Family Foundation is a private, family foundation that provides donations to a diverse group of charities. The family’s foundation looks to support education, preservation of teaching and history, advancement of the arts and health care.

About the Calgary Stampede Foundation

Since its inception in 1994, the Calgary Stampede Foundation has worked to preserve and promote western traditions, culture and heritage through charitable giving as well as promoting and advancing character-building youth programs. The Foundation is currently working with community leaders and philanthropists to develop world class programs and facilities that ensure our western legacy is preserved for future generations. The Calgary Stampede is a shareholder of the Foundation, which is responsible for a number of youth-oriented programs including Stampede School, the Calgary Stampede Showband and The Young Canadians School of Performing Arts.