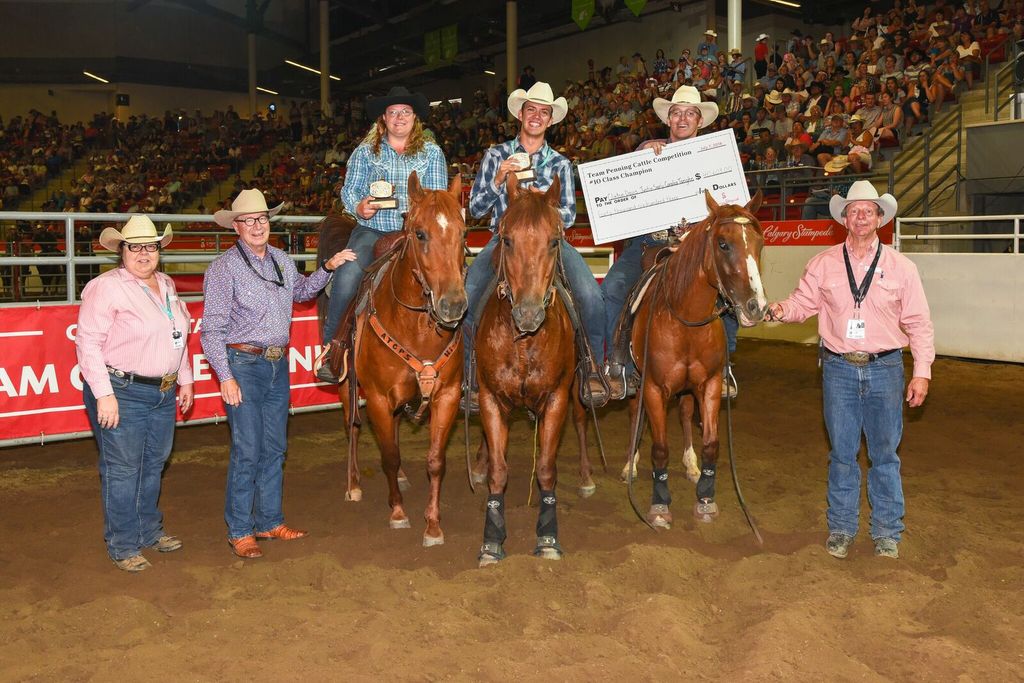 CALGARY — In addition to a thrilling display of horsemanship, strategic planning and nail-biting luck, Team Cattle Penning is a numbers game. Add it up right and ride off a champion; fail to do those sums properly and post a zero.

That arithmetic was on full display in the finals of 10 Class Team Cattle Penning at the Calgary Stampede on Saturday. In the first round of the night, two of the top three teams posted no times after failing to pen. That left the gate open for another team to gallop through, though not without a touch of drama.

“I don’t know what made me turn back, but I just did and I saw it and I made it go back,” said Coralea Tanghe of her split-second decision to check on the herd at the far end of the arena.

Good thing she did, as the cattle were heading to the foul line, which would mean a disqualification and that dreaded zero. Instead, Tanghe rode to the rescue, holding the line and the herd at bay while teammates Clinton Davis and Justin Seely finished penning the team’s designated three head of cattle in 38.01 seconds.

The trio followed that with a 39.4 in the final round for an aggregate score of 142.73 seconds over four rides with 12 head penned. It all added up to $40,603, the amount the three received for their Champion win, along with that coveted Calgary Stampede belt buckle and a commemorative bronze.

Here’s another number: one. That’s how many Stampedes Tanghe and her nephew Seely have now ridden in. Compare that to four, which is the number of major titles Davis has won, including the 10 Class at last year’s nationals. Tanghe, of Slave Lake, Alta., and Seely, of Entwistle, Alta., know veteran competitor Davis through the Alberta Cattlemen’s Penning and Sorting Association.

“Someone we ride with asked Coralea to come down to the Stampede and she was thinking about it. I was talking to him, and said if you’re talking to Coralea and Justin, I would love to ride with them,” Davis said. “Today came down to being smart and being solid, not taking any shortcuts and trusting each other. I am very, very proud of this team.”

The 10 Class, with 299 teams entered, saw the biggest purse of the four Team Cattle Penning classes: $136,344. The drama unfolded before a standing-room-only crowd at the Nutrien Western Event Centre. There was one person who wasn’t in the audience, however: Josh Seely, Tanghe’s father and Seely’s grandfather.

“The first thing we should do is phone my grandpa,” Seely said. “He’s the one who got us both into this sport. These are his horses and he supports us so much with all that we do. It’s unfortunate he couldn’t be here with us today.”

In the sport, teams of three riders have a scant 60 seconds to separate three cattle wearing a designated number from a herd of 30 and direct them into a 16-foot-by-24-foot pen at the opposite end of the arena. Teamwork is critical, with the riders working in harmony to cut the correct cattle and drive them to the pen. But while that’s taking place, the rest of the herd must remain behind a designated line. If an animal that’s not one of the team’s designated cattle crosses the line, that’s a trash out and the team is eliminated.

The four classes are based on relative skill and experience — in ascending order from 7 Class, to 10 Class, to 14 Class, to the trainers and travelling professionals of the Open Class. Due to increased interest this year, Stampede organizers expanded qualifying from three days to two to accommodate 800 teams. The top 20 teams in each class progress to compete in the third round, with the top 10 teams moving on to the finals. More teams mean more money, so the overall prize money for the event is approximately $393,000 this year.

That pumped-up money pool meant the 10 Class Reserve Champions — Pat Bolin, and David and Tanner Ruby — went home with a cheque for $27,069 for their aggregate time of 146.94 seconds with 12 head penned.

For the full results of the 10 Class Team Cattle Penning at the Calgary Stampede, please visit ag.calgarystampede.com/results.