All ‘Jacked’ up: Saskatchewan cutting ace set for Stampede Futurity

All ‘Jacked’ up: Saskatchewan cutting ace set for Stampede Futurity

CALGARY – It’s said that all work and no play make Jack a dull boy. But in this case, the right balance of work and play makes Jack a perfectly happy boy.

Since he got truly serious about the sport of cutting in 1998, Les Jack has been one of the more successful combatants at the Calgary Stampede’s annual fall Cutting Horse Futurity, presented by Wrangler. Hauling a handful of his own horses all the way from Rocanville, Sask., near the Manitoba border, Jack has trucked back with a total of eight championship buckles at the Stampede Futurity over the past 14 years — including twin titles in the autumn of 2011. 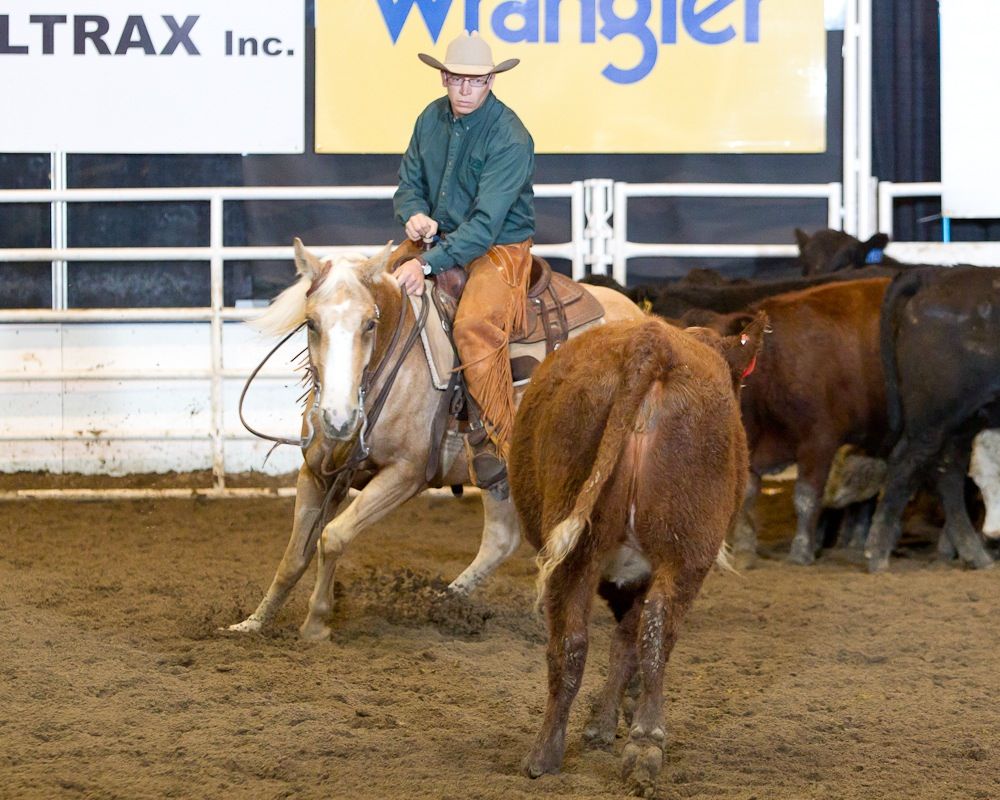 Jack has captured all of those Stampede Futurity class crowns as a Non-Pro rider. And despite his cutting success on both sides of the border, Jack has never been tempted to throw his hat in the Open ring, and reinvent himself as a professional trainer or cutter.

“Nope. I’d never consider it. I love the sport at the level where I’m at,” says Jack, who’s currently the president of the Saskatchewan Cutting Horse Association, as well as the vice-president of the Canadian Cutting Horse Association. “I run a construction business (AFAB Industries). We ranch on a small scale. My horses fit in with that, because I’ve got a good nucleus of people around me who allow me the time to train my own horses.

“To step up and become a professional trainer, and try to make a living at it? I encourage those who want to do that, to do it. But it’s not for me,” adds Jack. “I just want to be a real tough Non-Pro. There are a lot of real good ones out there, and it makes you get up in the morning and work hard at it.”

The 32nd annual Calgary Stampede Cutting Horse Futurity, presented by Wrangler, takes over the Corral on Stampede Park from Oct. 10 through 14. With more than 100 riders and 200 horses regularly arriving from as far afield as Texas and Ontario, and an annual prize purse of more than $300,000 — including $100,000 in added money this year — the Stampede Futurity represents the premier cutting event in Canada.

This year’s edition offers extra incentive, with the final seven Centennial Trophy Saddles going up for grabs as part of the Stampede’s 100-year birthday bash. Those saddles will be awarded to the Open and Non-Pro champions in each of the Futurity, Derby, and Classic/Challenge classes, as well as the winner of the Non-Pro 7-Up class.

Jack, who estimates he’ll be bringing five horses this year, is a serious contender to snare one or more of those saddles, after emerging as a Stampede Futurity double winner on the Non-Pro side twice in the past three years. Back in 2009, he captured Non-Pro Futurity on SDP Miss Me Sue and Non-Pro Derby aboard Smartyscowgirldiablo — and last year, he again topped the Non-Pro Futurity field on Im No Average Blonde while grabbing Non-Pro 7-Up glory aboard Catting.

Jack remains humble and deferential about his numerous trips to the Stampede Futurity winner’s circle.

“I don’t think that I’m really anything special. I’m surrounded by good people at work who allow me to pursue this sport, I’ve got a supporting wife and daughter, and I’ve got some peers who help me in the cutting pen,” he says. “I do pride myself on my work ethic . . . and I’d say that’s a common trait for anybody who wants to be competitive. I work hard at trying to get better. I’m learning all the time.”

The Stampede’s Cutting Horse Futurity features Open and Non-Pro rider categories — Open for horse trainers and pros, and Non-Pro for those who make no part of their income by training horses. Non-Pro entries can only ride horses owned by themselves or immediate family members. Equine age classes are headlined by the Futurity category for three-year-olds, and also include Derby (four-year-olds) and Classic Challenge (five- and six-year-olds). On the Non-Pro side, there’s also the 7 Up class for horses aged seven years or older. A $50,000 Limit Amateur Class, for those with NCHA earnings of less than $50,000 as of Jan. 1, 2012, is also offered within Non-Pro’s Derby and Classic Challenge classes.

Jack has extremely high hopes this year for Smart In A Instant, a mare he’s owned since the tail end of her four-year-old year. Last fall, a first-round rogue cow submarined their Non-Pro Classic Challenge title hopes at the Stampede Futurity, but the pair won the same class at the 2011 Big Sky Futurity and Aged Event in Kalispell, Mont., and made the Non-Pro Five-and-Six-Year-Old division final together at the National Cutting Horse Association’s 2012 Summer Spectacular in July.

While Jack also regularly competes at the Canadian Supreme in Red Deer and a handful of NCHA events, including the Futurity, the Super Stakes, and the Summer Spectacular, he considers the Stampede Futurity the marquee event on his annual cutting calendar.

“Calgary is so special because of all the volunteer effort that goes into that show,” he says. “In this deal? You show your horse, and hopefully the cards all fall at the right time. But for my training program, we want our three-year-olds to be ready for Calgary. We hope it all comes together at Calgary.”

The Stampede Futurity showcases the pure athleticism, instinct, agility and intelligence of the cutting horse. With horse-and-rider teams attempting to cut at least two, and most often three, individual cows out of a herd within 150 seconds, cutting has evolved into one of the most exciting equine events in North America. Contestants are evaluated by a panel of three judges and assessed a score based on the horse’s instinctive reactions, the challenges made by the cows cut, and any errors in judgment.