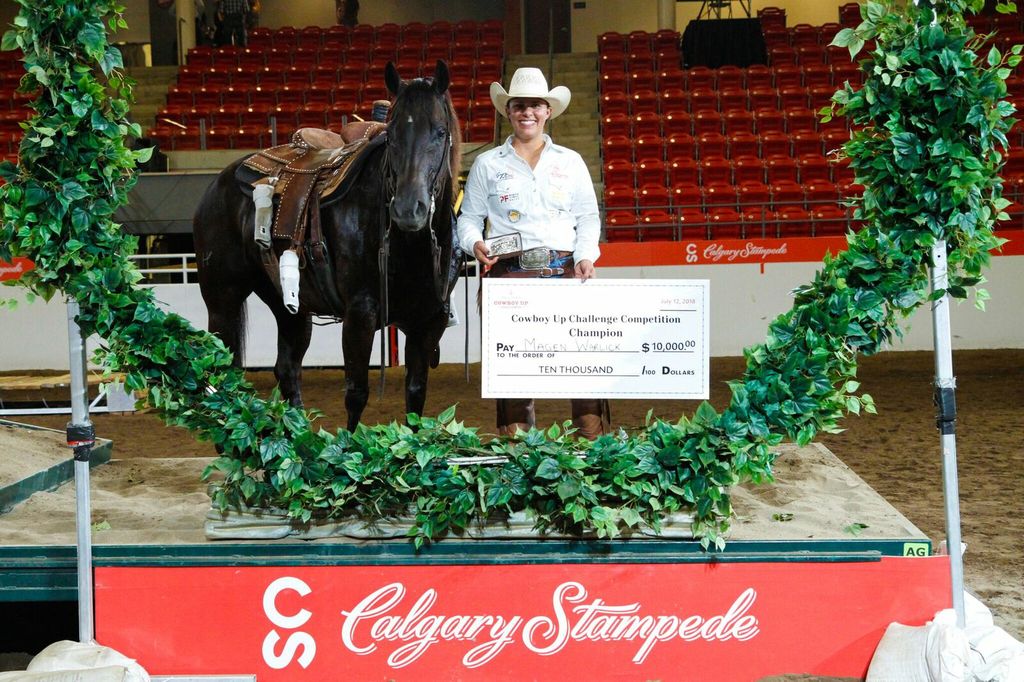 CALGARY — Some people are all hat. Magen Warlick is all race.

The cowgirl from Stephenville, Texas led the competition going into the sudden-death finals of the Calgary Stampede’s Cowboy Up Challenge on Thursday night, having dominated the two previous go ’rounds. It was a position she wasn’t about to relinquish without a fight.

“I have learned within the last year that if I safety up at all, I make mistakes, which causes my horse to make mistakes. So when I race, it’s all race,” said Warlick, the current Extreme Cowboy Association world and U.S. champion. “This is the biggest event all year and you give it all you’ve got.”

That she did, laying down the fastest time of the night at 223.288 seconds on her 12-year-old gelding TSU Hickory Cash and delivering a largely clean obstacle run that featured some incredible finesse. That kept her in the top spot and earned her the Champion belt buckle and a cheque for $10,000. It was a redemption of sorts for Warlick.

“Last year, when I got Reserve (at the Stampede), I had gotten lost (on the course) and I was pretty hard on myself. I was irritated that I forgot where I was going because I was perfect on everything else,” Warlick said. “I felt like I let him (TSU Hickory Cash) down. I feel like he is the real star. So to come back and have a bobble that he came right back from and to do everything else stellar, it is amazing that it actually happened.”

Warlick wasn’t the only one who bobbled on the challenging course. Ten elite riders and their sure-footed mounts faced an array of challenging obstacles, from becoming part of a live-action carousel to trip-tropping across a three-part bridge — including a narrow portion that served as a tightrope to the horses — in the final. It was all in pursuit of a share of the $30,000 purse, the richest Extreme Cowboy race in the world.

There was one competitor who didn’t make it into the money, but who won big nonetheless. While some people wait decades to fulfill their lifetime dream, Josh Sandness’s came true when he rode across the arena floor of the Nutrien Western Event Centre this week. Earlier this year, the 14-year-old from Kincaid, Kansas received a phone call inviting him to compete in the Cowboy Up Challenge.

“Honestly, I didn’t know what to think about being invited to come. It’s been my dream for a long time to go to the Stampede, and then to be the youngest person ever invited? Well, it’s a lot,” Josh said.

He got into the sport of extreme cowboy racing when he was eight, as soon as regulations allowed. A few years back, he even wrote an essay for a 4-H competition detailing how he wanted to be the youngest competitor ever invited to compete in the Stampede’s Cowboy Up Challenge. Josh’s mom, Beth, shared that it was all a bit overwhelming at first for the family.

“We were shocked. Your kid is 14 and this is his dream coming true,” she said. But accepting the invitation would mean Josh moving away to prepare for the Greatest Outdoor Show on Earth. “We had to do a lot of thinking and praying on it. We felt that God was telling us, ‘This is his dream’ and we have to do what we can to help make this happen.”

But Josh knows dreams don’t come true without a lot of hard work. He did, after all, finish third on his competition horse Ocho in the world standings in the youth division of the Extreme Cowboy Association in 2017. (He’s currently in fourth.) Once Ocho’s owner gave the okay, preparations for Stampede kicked into high gear. In May, Josh moved to Springfield, Missouri, a three hours’ drive from home, to work with trainer Johnie Clem. The teen has been staying with Pat Keck, who owns the horse Clem is competing on at Stampede.

After the finals (Josh finished 10th, Clem ninth), the teen said Thursday night’s ride was the highpoint of his Stampede experience. And now that he’s fulfilled that lifetime dream?

“I’d like to keep going. I want to turn pro one day and train horses for a living.”

Visit ag.caglarystampede.com/results for full results from the Cowboy Up Challenge.