An Evening with Oprah presented by the Calgary Stampede

An Evening with Oprah presented by the Calgary Stampede

On Tuesday, January 22, the Calgary Stampede welcomed An Evening with Oprah.  This incredibly inspiring event saw a sold out crowd at the Scotiabank Saddledome with fans eager to catch a glimpse of the star.

Introduced by our very own Deanne Carson, vice-president, Marketing and External Relations, Ms. Oprah Winfrey strutted on stage donning a beautiful white cowboy hat — presented to her just minutes before.  The crowd was overwhelmed with excitement to see the icon wear the hat with such pride.

“It was an honour to introduce Oprah,” says Carson.  “To listen to her speak was truly inspirational.  I gained an understanding of why people have shared their most intimate moments with her on television. She really has changed our world!”

Oprah delivered inspirational messages, humorous anecdotes and personal moments with the audience.  She spoke of her past, present and future and how each and every person in the audience could aspire to greater things and “live their best life.”

She spoke about her journey to becoming a talk-show icon, an Academy Award nominated actor and a world class philanthropist.  She spoke about her “sisters” in South Africa who attend her Oprah Winfrey Leadership Academy for Girls.  And she even spoke of her changing hairstyles throughout the years.

It was an evening full of laughter, tears, emotions, inspiration and wisdom. An Evening with Oprah was a once in a lifetime opportunity for many Calgarians; however, it is only the beginning of great events and programs the Calgary Stampede will bring to Calgary for the next 100 years. 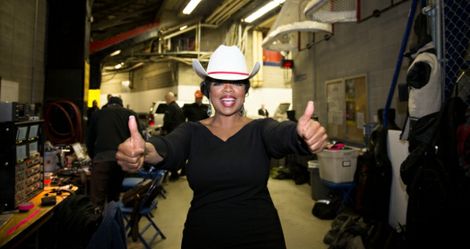