CALGARY – Norm Vertefeuille didn’t need much of a push to get involved in horse pulls. And 30 years later, he’s still a tireless teamster. 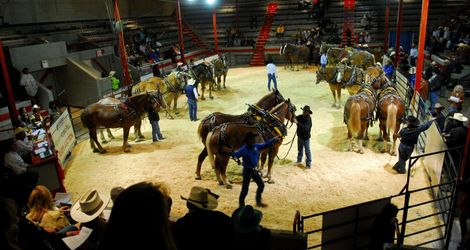 Vertefeuille, of Lumsden, Sask., is one of the longest-serving competitors in the Calgary Stampede’s Heavy Horse Pull, having first set the hook under the Big Top back in 1996. And by this point, it’d probably take a team of his own Belgians to keep him away from Stampede Park in mid-July. “I was born on the farm (in Saskatchewan), but I hadn’t had horses for a long time, and we’d just moved back from New Brunswick. One of our neighbours, Ron Sebastian (a regular Stampede competitor over the years), was pulling at the time — this was 1983 — and we went to a couple of pulls. I got the itch, so I had to scratch,” says Vertefeuille with a laugh.

The Stampede’s Heavy Horse Pull runs through the final three nights of The Greatest Show on Earth — from Friday, July 13 through Sunday, July 15. It’s Canada’s premier pull, and the richest horse pull in North America, with winners in each of the heavyweight, middleweight, and lightweight divisions taking home $3,000. A total of 29 teams are expected to compete during the Stampede’s Centennial year, arriving from as far away as Oregon, Washington, and Michigan. And this year, the Stampede’s Heavy Horse Pull committee will be introducing a Centennial Trophy, which will bear the names of the winners in each weight class for 2012 and beyond.

This summer, Vertefeuille and neighbor Earl Kazmere, who’s helped out the Trails End Acres rig for the past three years, will arrive with two teams of mighty Belgians — Star and Ned in the heavyweight division, and Kon and Nip in the middleweight class. “The horses are just like people. Every one of them has a different temperament, and they’ve all got to get treated totally differently,” says Vertefeuille. “If the horses are in good shape, and they’ve been worked hard, in my mind, it doesn’t matter how much they pull — if they give you everything they’ve got, that’s what matters. Win, lose, or draw, I always say that if my horse gives me everything it’s got, I don’t want anything more.”

Over the past two years, the Stampede pull has seen some breathtaking displays of mighty horsepower. In 2010, Dennis Weinberger of Cochrane, Alta., and his Springbank Belgians outfit won the triple crown for the first time in Stampede Heavy Horse Pull history, claiming all three divisions. And in 2011, it was Randy Dodge’s turn to make a clean sweep. The veteran teamster from Albany, Ore., earned himself a Stampede trifecta, including a win in the heavyweight division using horsepower loaned to him by Stan Grad’s Airdrie, Alta.-based Soderglen Ranches. Dodge then directed the Soderglen team of Belgians, Ben and Roy, to a new Stampede record in the heavyweight division, pulling a 13,300-pound sled the full 14 feet.

Besides the caliber of competition and the prize payouts, there’s another reason the Stampede’s Heavy Horse Pull has such a sterling profile — and that’s the official kickoff to the event, the annual Advertisers’ Auction, which will be held on Wednesday, July 11 under the Big Top at 7 p.m. First established in 2002, the Stampede’s Heavy Horse Pull Advertisers’ Auction has become a truly magnetic event for individual and corporate supporters, with attractive and affordable branding possibilities.

The Heavy Horse Pull allows supporters a great opportunity at promotion, a unique venue for entertaining clients, and the chance to view some top-notch agricultural entertainment. For successful bidders, the Heavy Horse Pull advertiser’s package includes passes to watch their teams during competition from a private VIP section under the Big Top, signage on the horses during competition, stall signage in the barns, and an exclusive party in the Victoria Pavilion alongside the horses after the main events. Last year’s edition smashed all previous records, with bids for 23 teams totalling $62,200. “Our Advertisers’ Auctions have become a real spectacie,” says Don Berglund, who chairs the Stampede’s Heavy Horse Pull committee. “It’s amazing how charged up people will get when their name is proudly displayed on the winning team.”

Adds Vertefeuille: “It’s the people that make this sport, I think. Ever since the Stampede started holding the auction, it’s been more of a ‘people’ event than ever. Last year, I was telling a lady about my team of middleweights. I said, ‘They’ve only been together six months. I don’t know what they’re going to do, but they’re going to give me everything they’ve got.’ She said, ‘Well, you’re honest. I’m going to buy you.’ And she did, darn it!”

This year’s teams primarily feature Belgian and Percheron horsepower. Classes are based on the total weight of the two-horse team – lightweights from 2,400 to 3,000 pounds, middleweights from 3,001 to 3,500 pounds, and heavyweights tipping the scales at 3,501 pounds and up. Potential bidders looking to attend the 11th annual Heavy Horse Pull Advertisers’ Auction can contact Navada Phipps in the Stampede’s agriculture administration office at nphipps@calgarystampede.com

Vertefeuille, who won a trio of Stampede titles in the heavyweight division back in the 1990s, has won numerous Class of the Class honours at Calgary — an award bestowed on the team that best demonstrates a combination of performance, sportsmanship, and overall appearance. He’s as busy as ever on the pulling circuit, with his 2012 calendar featuring 15 events — as far afield as Swan River, Man., and Minot, N.D. “It’s a great pastime. Great exercise. And the horses don’t talk back,” he chuckles.