CALGARY – Clearly, this spectacle has plenty of pull.

The Calgary Stampede’s Heavy Horse Pull regularly sets up shop in the Big Top during the final weekend of The Greatest Outdoor Show on Earth. And its annual kickoff event – the Heavy Horse Pull Advertisers’ Auction – got things started on the right hoof Wednesday night. 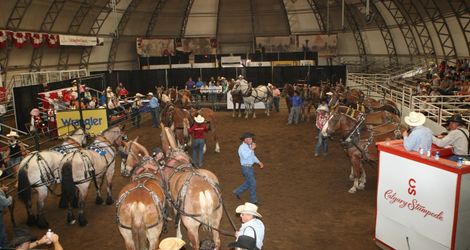 Bidding reached a fever pitch under the Big Top, as prospective sponsors and supporters vied for three-day “ownership” of 26 horse-pull teams, which have arrived from as far away as Oregon, Michigan, and Ontario for Canada’s premier pull.

“This event is all about raw power. People see these big horses doing things they can’t imagine big horses could do,” said Don Berglund, who chairs the Stampede’s Heavy Horse Pull committee. “Their size is unbelievable . . . our biggest (two-horse) team this year weighs nearly 5,500 pounds.

“The teamsters burn a lot of gas bringing those big horses here for us, and this auction is an essential component of the show – they take away 50 per cent of everything that’s raised. Because of that, we’ve managed to attract some pretty big pullers from across North America,” he added. “Bidding was great tonight. A large number of bidders, and a record bid of $6,000 for one team. This really keeps up the momentum that we started in a big way last year.”

The Heavy Horse Pull – the richest horse pull in North America, with division winners pocketing $3,000 and no competitor walking away with less than $1,000 in prize money during the Stampede’s Centennial year – will take over the Big Top for the final three nights of 2012 Stampede.

Since it was established in 2002, the Stampede’s Heavy Horse Pull Advertisers’ Auction has become a truly magnetic event for individual and corporate supporters, with attractive and affordable branding possibilities and a unique venue for entertaining clients and employees. For successful bidders, the Heavy Horse Pull advertiser’s package includes passes to watch their teams during competition from a private VIP section under the Big Top, signage on the horses during competition, stall signage in the barns, and an exclusive party in the Victoria Pavilion alongside the horses after the main events.

Wednesday night, that record bid of $6,000 came from Copp’s for the heavyweight Belgian pair of Jesse and Sam, co-owned by Dennis Weinberger of Cochrane, Alta., and Scott Fisher of Edwardsburg, Mich., and teamstered by Weinberger.

The Soderglen Ranches team of Simon and Mike, owned by Stan Grad of Airdrie, Alta., and teamstered by Randy Dodge of Albany, Ore., garnered the top auction bid in the middleweight division of $3,500 by individual supporter Terri Holowath.

Meanwhile, the duo of King and Kris, owned by Weinberger and Fisher and teamstered by Weinberger, earned the top bid among the lightweight outfits, at $3,000, from Catalyst Accountants.

The 2012 edition of the Heavy Horse Pull will consist primarily of Belgian and Percheron horsepower. Classes are based on the total weight of the two-horse team – lightweights from 2,400 to 3,000 pounds, middleweights from 3,001 to 3,500 pounds, and heavyweights tipping the scales at 3,501 pounds and up.

Dodge enters this year’s competition as the defending champion in all three weight classes. Dodge earned a Stampede trifecta in 2011, including a win in the heavyweight division using horsepower loaned to him by Grad’s Soderglen Ranches. Dodge then directed the Soderglen team of Belgians, Ben and Roy, to a new Stampede record in the heavyweight division, pulling a 13,300-pound sled the full 14 feet.

This year, thanks to the Stampede’s 100th birthday bash, the Stampede’s Heavy Horse Pull committee will be introducing a Centennial Trophy, which will bear the names of the winners in each weight class for 2012 and beyond.