The indie band originally from Hamilton, Ontario, performed songs from their sophomore albumMichigan Left. The five man group, who were recently named “best live act” by CBC Radio 3, lived up to their reputation this evening. 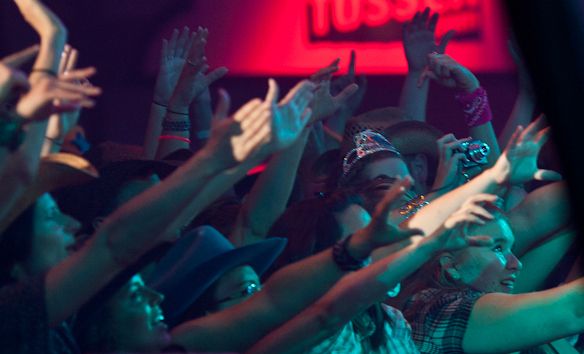 “Budweiser Blank Ticket is a spectacular way to kick off the Calgary Stampede,” says Lindsay Ell, programming production manager, Calgary Stampede. “We are so happy to have the Arkells and all of this year’s incredible artists performing on the Nashville North stage. It’s also a great way to remind folks of all the free entertainment that the Calgary Stampede offers starting tonight and continuing right through July 15.”

VIP passes to this very special event were won through Budweiser, the Calgary Sun and X92.9.

“The Budweiser Blank Ticket continues to be an amazing event,” says Blaine Kulak, Marketing Manager at Labatt Breweries of Canada. “The mystery of not knowing who will be performing until they hit the stage, creates anticipation and a special energy in Nashville North.  That’s what makes this a really unique and impressive event.”

As always, access to Nashville North is free with Stampede Park gate admission. For a full list of Nashville North performers visit cs.calgarystampede.com/music/nashville-north.