CALGARY – Once again, the Armstrong clan has flexed some serious penning muscle at the Calgary Stampede. 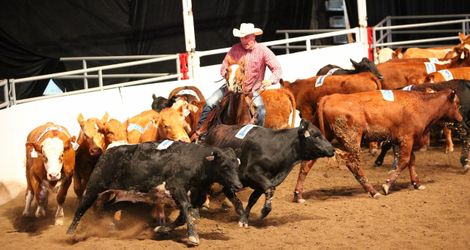 Twin brothers Justin and Graham Armstrong, along with Wim Van Der Poel of Okotoks, Alta., came up with the fastest time of the night when it counted Friday during the 14 Class final of the Stampede’s Team Cattle Penning Competition, presented by Calfrac Well Services. And even though they entered the Scotiabank Saddledome infield with a comfortable 10-second cushion, their scorching 26.55-second ride put a stamp of authority on their victory – while, at the same time, denying older brother Russell a third consecutive 14 Class crown at the Stampede.

“He’d won twice (at the Stampede), and we’d only won once before, so now we’re all even,” added Graham, whose Armstrong clan is, rather appropriately, based in Armstrong, B.C. “You hope for your brother to win, but it’s definitely better when you beat him.”

The Stampede’s Team Cattle Penning Competition, presented by Calfrac Well Services, has drawn a record 764 teams from across the continent during its Centennial year, with a total prize purse of $394,610.

A total of 132 teams began the 14 Class competition with two rounds of qualifying on Thursday at the Okotoks Agricultural Society. With a winning aggregate time of 116.66 seconds on 12 head of cattle, the Armstrong twins and Van Der Poel will split a cheque for $22,374, while also collecting Stampede championship buckles – and, in honour of the Stampede’s 100-year birthday bash, limited-edition Centennial Trophy Saddles handcrafted by Vic Bennett Saddles of Sherwood Park, Alta.

Russell Armstrong, who’d won a 14 Class buckle in both 2010 and 2011 at Calgary, was forced to settle for a Stampede reserve championship. With a time of 135.14 seconds, Armstrong, Wallace McComish of Stettler, Alta., and Larry Cressman of De Winton, Alta., will split a runner-up cheque of $14,916.

Team Cattle Penning, a race against the clock, gives a team of three riders on horseback 60 seconds to separate three specifically identified cattle from a herd of 30 and direct them into a 16-foot-by-24-foot pen at the opposite end of the arena. Teamwork is paramount, with all three riders working in harmony to cut out the correct cattle and drive them to the pen. Teams of riders enter the Stampede’s four classes based on relative skill and experience — in ascending order from 7 Class, to 10 Class, to 14 Class, to the pure travelling professionals of the Open Class.

The Armstrong twins and Van Der Poel had also laid down the fastest time of Friday’s third round, which thinned the field from 20 to 10. And with that sizeable lead entering the 10-team final, the trio could have played it safe.

Instead, they separated two of their numbered cows almost immediately, followed quickly by another, and didn’t look back in authoring a comfortable 18.48-second margin of victory over four rounds of competition.

“We didn’t want to think about it too much, to be honest with you. The minute you start trying to change things, that’s when they go wrong,” said Graham.

Van Der Poel has been penning with the Armstrong twins at big competitions for three years, and claims his first Stampede buckle. What does he like about penning with Justin and Graham?

“I don’t have to use my brains,” he quipped. “They pen a lot together at the bigger shows, and it’s everything or nothing . . . but it’s always fast.”

Team Cattle Penning action will continue in the Saddledome over the next three evenings – the 10 Class on Saturday, July 7, the Open Class on Sunday, July 8, and the 7 Class on Monday, July 9 – with third rounds beginning at 5:30 p.m. and finals immediately following.