CALGARY – Once again, the milkman has delivered. 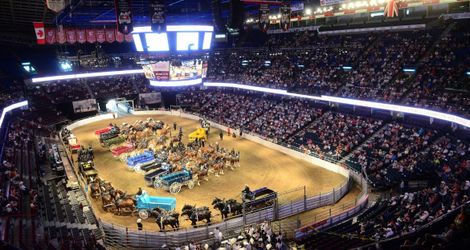 With driver Kyle Forsyth holding the lines, Country Lane’s half-dozen Belgian geldings prevailed in a four-wagon drive-off before a packed house at the Scotiabank Saddledome on Sunday afternoon – earning a prize of $10,000 and knocking off the two-time defending champions, the Jackson Fork Ranch Percherons of Bondurant, Wyo., in the process.

Stampede champs in 2008 and 2012 . . . not too shabby for a program that began as little more than a hobby eight years ago on a rural Ontario farm.

“I’m in the milk transport business. I wanted to rejuvenate the dairy industry, make our operation look like it did when we used horses, and I’ve got a half-dozen old antique milk wagons and old antique equipment. So I bought a pair of colts and broke them,” recalled Country Lane Belgians owner Ted English on Sunday, basking in the glow of victory. “We lost one of them after about three months because of colic, so we bought another colt. And everybody said he was too good just to play with – so we started showing.”

These days, the Country Lane Belgians rig crisscrosses the continent, showing at 15 to 20 shows a year including the Indiana State Fair, the New York State Fair, and Toronto’s Royal Agricultural Winter Fair – with Sunday’s victory in the Saddledome another huge notch in their belt.

“This show is the best of the best, here. And it’s a team effort. You could have super horses, but you need to drive as a unit. It’s just like a ball team – you could have a .400 hitter, but he can’t do it all by himself,” said English. “Some guys might have one superstar horse, but it takes six – getting them ready, and having them work as a unit.”

“It was a real hard job today for the judges to decide who should end up in first place. There were so many good hitches in the ring, and then we had to do the drive-off,” said Lorne Hammer, who chairs the Stampede’s Heavy Horse Show committee. “But the Englishes did an awesome job here and deserved to win.”

The next item on the Country Lane Belgians’ agenda is the North American Belgian Championship at the Keystone Centre in Brandon, Man., from July 17 to 21.

“The first go, the horses drove really smooth today. And in the drive-off, they just found another gear. They had lots of energy left,” said Forsyth, 26, who’s been driving the Country Lane Belgians hitch since April 2011. “It’s just awesome that we can gain that kind of momentum, heading into Brandon, from a big win like this.”

The Stampede’s Heavy Horse Show, presented by Halliburton, features the gentle giants of the equine world in the Saddledome and the Big Top. Over a four-day span, ending on Monday, July 9, a total of 238 Belgians, Clydesdales, Percherons and Shires from six Canadian provinces, and the U.S., will have competed in more than 100 classes.

Breed Supreme Champions and the overall best in show, which will receive the Jim Peak Memorial Trophy, will be crowned Monday in the Saddledome, beginning at 1 p.m. Classes for the four breeds include entries of cart-drawn single horses, two-horse teams, three-horse unicorn hitches, and four- and six-horse hitches.