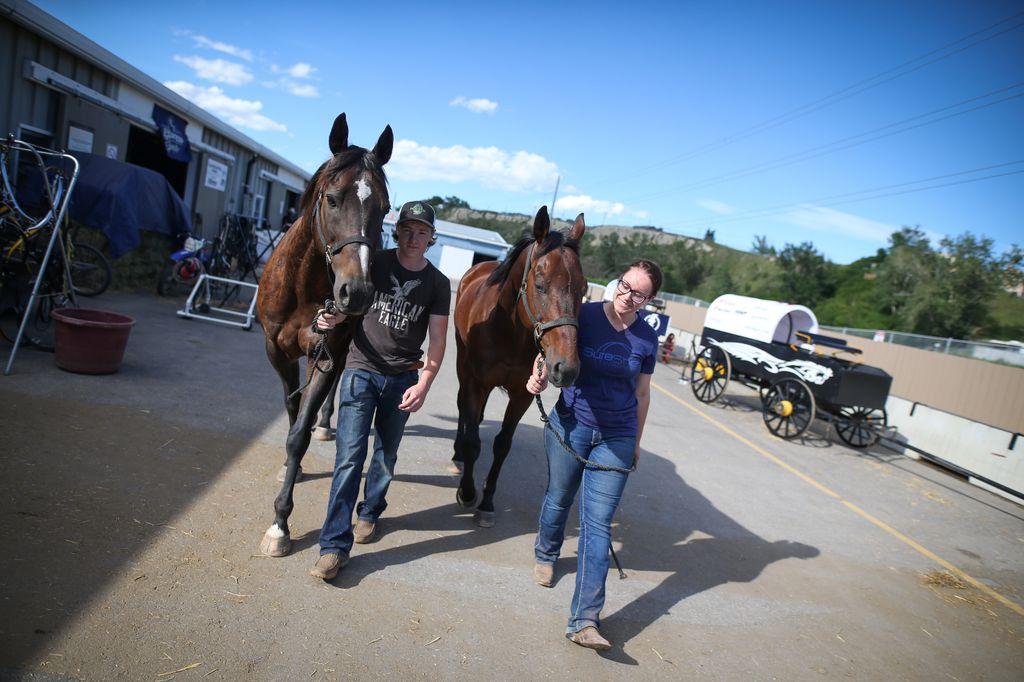 Monday night belonged to Kurt Bensmiller, who maintained his hold on the GMC Rangeland Derby aggregate standings with another terrific showing. Bensmiller, who's captured three of the past four championships at the Stampede, owns a four-day clocking of 4:47.02.

Earlier in the day, it was his driving legend father,  Buddy Bensmiller, who was getting all the attention. The two-time world champion, three-time Calgary Stampede Champion was inducted into the Calgary Stampede's Pioneers of Rodeo Hall of Fame, along with John Scott and Marlene McRae.

Rounding out the aggregate leaders after four nights of racing are Kris Molle, Vern Nolin, Mark Sutherland, and Evan Salmond. Mike Vigen's wagon with his son Chanse at the reins laid down the fastest lap of the night - 1:11.28.

All of the 36 drivers who race the track with their equine teams for extremely strong bonds with their horses.  And at the same time, those horses are forming bonds with each other. Take Curly and Soup form Roger Moore's lead team. Beyond racing – and racing well – together, the horses have forged an intimate relationship, a deep one. When Curly, a couple of years ago, sustained an injury, Moore whisked him to a nearby veterinarian's clinic. The stay was long – a month – and Soup took hard his friend's absence.

"He quit eating," says Moore. "He kind of went downhill – until I brought the other one back." Still on the mend, Curly needed to remain in a box stall for a month. Soup? Never left his side.

"It would be no different than you and your wife. Same thing," says Moore. "Pretty well everything about horses' (behaviour) is exactly the same as humans'." No surprise, Curly and Soup, while Moore makes his point, are standing side by side in Moore's allotment of stalls at the Calgary Stampede grounds. Quite the bromance.  No surprise, every chuckwagon driver at the GMC Rangeland Derby tells similar stories.

Chad Harden says it just makes sense that some horses are tight – no different than players on a hockey team – and it's worth fostering that alliance.

"When you're buddies on the road and you're linemates, you stick together," says Harden. "You sit beside each other (in the dressing room), you go to lunch together, you have beers, right?" Drivers, of course, hook their horses nightly in a specific order. There's nothing random about it. But it's no different in the barn. No different on the highway.

"You don't just throw horses in a liner, and say, 'OK we're in Calgary,'" says Danny Ringuette. "Before I go out on the road, I'll spend two hours deciding how I'm going to put them in the liner for my first show. Just so you get it right. If this horse doesn't like that horse … it's all watching and paying attention to what your horses are doing. You don't put a horse that doesn't like another one next to each other when you're hauling down the road."

After all, these are the sport's star attractions. For them, there's comfort in familiarity – no matter where they happen to be. For Harden's herd, their stall order is their liner order. No variation. As he explains: "The (Calgary Flames') trainer probably sets up the dressing room on the road the exact same way it is when they're at the Saddledome."

Drivers figure it out quickly, who wants to go where, who needs space, who needs company. In Ringuette's barn, two of his veterans – Minor and Thunder – get side-by-side stalls, no matter what.

"If (Minor) doesn't see him, he's freaking out and calling," says Ringuette. "They're both the same – they need to have each other."  So making them neighbours is a no-brainer.

"It prevents them from being uncomfortable," says Ringuette. "If their buddy's next to him, they sniff him, then they're good, right?

We’re taking pancakes on the road!

Calgary – We’re taking pancakes on the road! The Community Pancake Drive-thru, presented by GMC, will be keeping the Stampede Spirit alive with a FREE pancake breakfast, drive-thru style. Round up ...

Bell Fireworks Spectacular to light up the night!

Calgary – Nothing says Stampede Spirit quite like fireworks in July! We are extremely excited to announce that the Bell Fireworks Spectacular will light up the night sky over Calgary on July 3 and 12 ...