Calgary – Since its debut in 1912 the TransAlta Grandstand Show has grown into a spectacular production. New themes year after year captivate audiences and have the crowd eagerly anticipating what will come next. One consistent element in the show has always been music – powerful, live music of all genres. 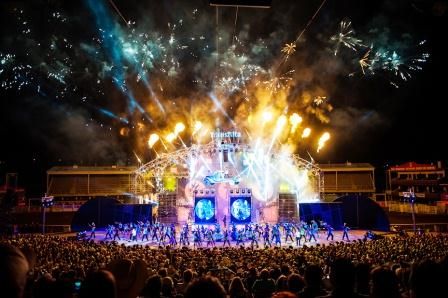 “Each year we create new shows for our guests,” says Bill Avery, Grandstand Show executive producer. “We have new performers and features, but they all have one thing in common - music. We are thrilled to feature music as this year’s theme. Music has the power to evoke so much emotion while telling a story.”

The show will focus on five genres of music - each performed by The Young Canadians of the Calgary Stampede and one of our many guest performers, including KISS tribute band Destroyer and Freddie Mercury performer Marc Martel. Stunning special effects will include a flying baby grand piano and fabulous fireworks.

This year the Stampede is thrilled to partner with a number of Calgary Arts organizations - highlighting the world-class talents that live, perform and contribute right here in our backyard. Some of the performers who will be featured in this year’s Grandstand Show include: Donovan Seidle of the Calgary Philharmonic Orchestra, Michelle Minke from Calgary Opera and performers from Alberta Ballet. “Collaborating with the Calgary Arts community this year is incredible,” adds Avery. “Many of our Young Canadians aspire to be a part of these organizations.  Having a chance to work with arts icons early in their development is inspiring for our Young Canadians.”

The show will feature entertainment and performers from different cultures. This year we are thrilled to have Flag Circus, from Beijing, China.  This specialty corps of ballet dancers performs on lighted globes.  Pole on Globes, also from China will amaze the audience with an aerial acrobatic performance blended with performers mounted atop rolling globes. The Calgary Stampede will be their first time performing in North America. In addition, Raghav, a Calgarian whose fusion of hip-hop, R&B and Bollywood has earned him top ranks on the U.K. charts.

The 2013 TransAlta Grandstand Show is sure to have something for everyone. Stay tuned for even more announcements of some of the great new talent to be featured on the TransAlta Stage.

Tickets for the Calgary Stampede Evening Show begin at $54 and can be purchased online now at Calgarystampede.com/tickets - tickets sold out in June for the 2012 Grandstand Show and are selling quickly this year.  Evening Show tickets include a seat to the thundering GMC Rangeland Derby Chuckwagon Races, the TransAlta Grandstand Show and an amazing vantage point for the nightly fireworks.

The TransAlta Grandstand Show runs each evening of the Calgary Stampede from July 5-14, 2013. For more information, please visit calgarystampede.com.