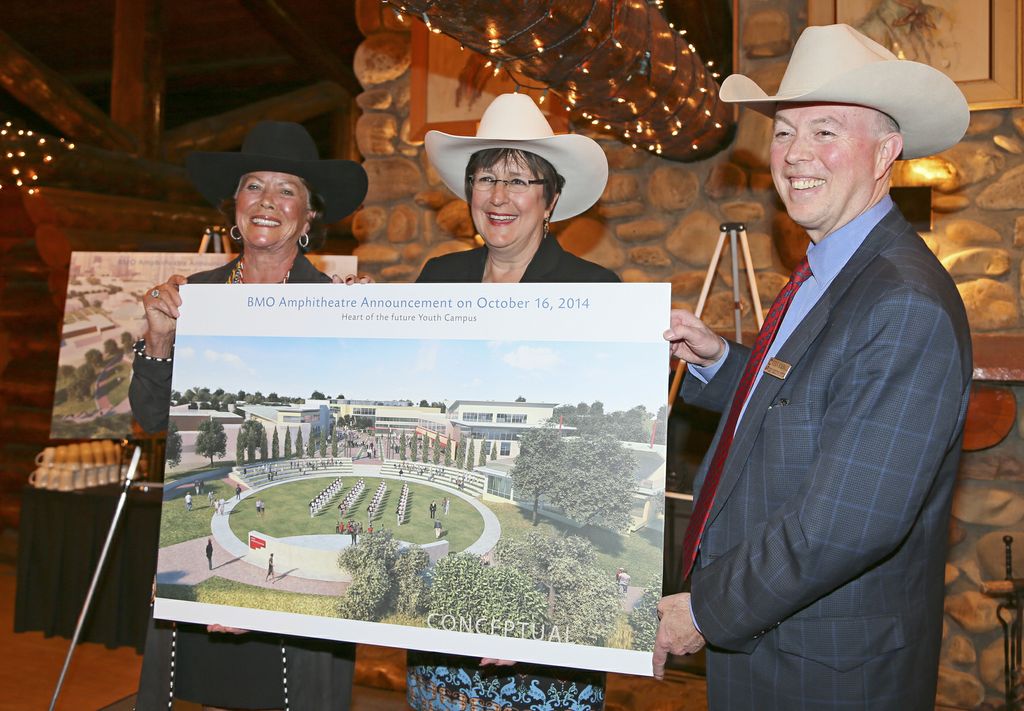 BMO Financial Group and the Calgary Stampede Foundation today announced plans to build the BMO Youth Campus Amphitheatre as part of the Youth Campus at Stampede Park. The new facility is slated to be completed for 2016 and will serve as a much-needed space for youth to perform, learn, and enjoy the arts.

"BMO has a proud and longstanding history of supporting the Calgary Stampede, dating back to 1899 when the original Stampede lands were christened," said Susan Brown, Senior Vice President, Alberta and NWT Division, BMO Bank of Montreal. "The construction of the BMO Youth Campus Amphitheatre brings us one step closer to our vision of Stampede Park being a year-round pillar of Calgary."

The funding announcement was made at an event at The Rotary House in Stampede Park, attended by Susan Brown; Vern Kimball, CEO, Calgary Stampede; Ann McCaig, chair, Calgary Stampede Foundation and co-chair, “We’re Greatest Together” capital campaign; and other community and corporate leaders.

Design of the BMO Amphitheatre is at the conceptual phase and will consist of a 40’ x 50’ stage and flat and tiered seating. The facility will sit at the edge of the Elbow River and is expected to have seating for about 800 people. BMO Youth Campus Amphitheatre will be a focal point of the seven-acre Youth Campus, and a new hub for performing arts and youth in Calgary.

“The addition of the BMO Youth Campus Amphitheatre will further develop the Stampede Foundation’s and Calgary Stampede’s relationships with other Calgary arts groups,” says Ann McCaig, chair, Calgary Stampede Foundation and co-chair, “We’re Greatest Together” capital campaign. “The shared space will become a destination for Calgarians who wish to enjoy the talents of Calgary’s youth.”

The BMO Youth Campus Amphitheatre will be used by students from the Calgary Arts Academy, the Calgary Stampede Showband, the Young Canadians School of Performing Arts, Stampede School and other arts organizations requiring outdoor performance and rehearsal space. Home to the Greatest Outdoor Show on Earth, Calgary is Canada’s sunniest city - enjoying close to 2400 hours of bright sun each year, spread over 333 days. Outdoor venues and gathering spaces are essential to make Stampede Park a year-round gathering space.

Located on the banks of the Elbow River, across from ENMAX Park, Youth Campus will provide youth with a best-practice campus. It will feature ample green space, the future SAM Centre and have custom-designed indoor and outdoor classrooms, as well as training and performing spaces. It will be used by different youth groups including the Young Canadians School of Performing Arts, the Stampede Showband, Stampede School, and will be the future home of the Calgary Arts Academy. More details are at http://corporate.calgarystampede.com/about/park-development/youth-campus.

About BMO and the Calgary Stampede Foundation

BMO’s ties to the Calgary Stampede are long and remarkable. The relationship between BMO and the Calgary Stampede is the oldest business relationship in Western Canada, dating back to 1884. BMO has been the banker to the Calgary Exhibition since 1899 when lands were christened. The Agricultural Society had purchased 94 acres of land from the Dominion of Canada and built a race track, cattle sheds and an exhibition building. BMO continued as the banker in the fall of 1912 when the first rodeo (Stampede) took place which grew to become the Calgary Exhibition and Stampede in 1923.

Calgary – Following a year of unprecedented circumstances, BMO Bank of Montreal and the Calgary Stampede are proud to belatedly recognize the southern Alberta farm families who received 2020 BMO Farm ...

Calgary – Symbolizing the passing of the storm and recognizing resiliency and optimism, the 2021 Calgary Stampede poster was created by 22-year-old Calgarian Lexi Hilderman, winner of the Calgary ...