Calgary – The Calgary Stampede and BMO Bank of Montreal today celebrated 100 years of history together with the presentation of the annual BMO Farm Family Awards which recognizes 20 southern Alberta families for their outstanding contributions to Alberta’s agricultural sector. 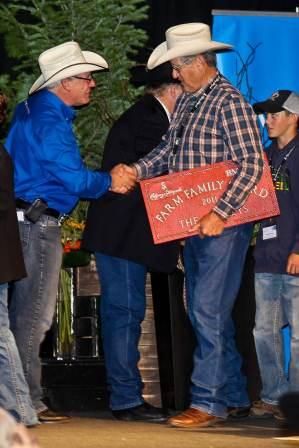 “The BMO Farm Family Awards are an excellent way to show our support for farmers and ranchers in the province,” said Bill Hogg, vice-president, Alberta/NWT Commercial District, BMO Bank of Montreal. “These families are outstanding examples of how far farm management has come and the tremendous contributions they make Alberta’s economy. They combine the ideals and traditions of the past with advanced agri-business practices, which are being passed along to future generations,” Hogg added.

The Hon. Verlyn Olson, QC, Minister of Agriculture and Rural Development, was on hand along with Mike Casey, president and chairman of the board, Calgary Stampede to congratulate the recipients of the 2012 BMO Farm Family Awards.

“Alberta has an exciting and successful agriculture story to tell and it is largely due to families such as those we are honoring today,” said Verlyn Olson, Minister of Agriculture and Rural Development. “The devotion of these families to agriculture, family, community and the environment in which they live and work is something that absolutely is worthy of recognition.”

The BMO Farm Family Award recipients were chosen for this honour by the Alberta Agricultural Service Board based on the difference they have made to the farming community. The awards highlight many innovations and skilled business and environmental practices of Alberta farmers and ranchers within an industry that also upholds western heritage and family values.

All of the Farm Family Award recipients expressed a deep and abiding commitment to the rural way of life, supporting their communities and passing along knowledge to the next generation.

“We are proud to recognize these farm families who uphold the traditions of the past while strengthening Alberta’s economic growth,” said Mike Casey, president and chairman of the board, Calgary Stampede.

The celebration of farm families comes at a time when the most recent Census points out a continual shift in population in Canada.

With an increasing number of young people moving from rural areas to cities, Canadians were asked in a recent BMO survey if this trend will have an impact on Canada’s overall economy. 31 per cent of Canadians said this migration would have a positive impact and almost an equal amount, 35 per cent, said this was negative for the economy. Albertans were more optimistic than any other region in Canada with 36 per cent saying this trend is positive and 29 per cent saying it could have a negative impact.

However, when asked if this trend could have an impact on family farms, Albertans were found to be the most concerned of all Canadians with 72 per cent saying the migration of youth specifically from farms to the city was negative compared to 62 per cent of Canadians surveyed saying it was negative.

The results of the survey demonstrate the importance of Alberta’s agricultural sector to consumers. Agriculture has been a constant theme of the Calgary Stampede and an important component of BMO Bank of Montreal’s commercial banking business in the province.

The winners of the 2012 BMO Farm Family Awards are:

Each family was presented with a personalized farm gate sign, and had a professional photograph taken. The families will receive admission to Stampede Park and tickets to Stampede Rodeo.

Detailed biographies are available at http://ag.calgarystampede.com/events/515-bmo-farm-family-awards.html. Click on General Information, scroll down to the family name and click to download the appropriate biography. Farm Family photos are also available upon request.

The BMO survey results cited are from online interviews with a random sample of 1,011 Canadians 18 years of age and over, conducted by Pollara between May 18 and May 23, 2012. A probability sample of this size would yield a margin of error of ±3.1%, 19 times out of 20.

About BMO and the Calgary Stampede

BMO Bank of Montreal’s ties to the Calgary Stampede are long and remarkable. The relationship between BMO and the Calgary Stampede is the oldest business relationship in Western Canada, dating back to 1884. We have been the banker to the Calgary Exhibition since 1899 when lands were christened at Victoria Park.  The Agricultural Society had purchased 94 acres of land from the Dominion of Canada and built a race track, cattle sheds and an exhibition building. And BMO continued as the banker in 1912 when the first rodeo took place and it became the Calgary Exhibition and Stampede.