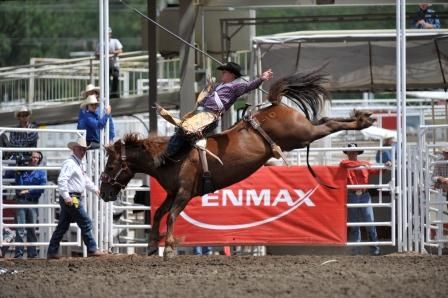 Her final resting place? A spot of honour at the Calgary Stampede Ranch, where she was born and raised.

“She was a special, special mare. She had an incredible athletic ability in the arena, and you could just see her competitive spirit and natural pride each time she competed,” says Keith Marrington, Director of Rodeo for the Calgary Stampede and long-time overseer of the Stampede Ranch and Born to Buck program. “Each time the cowboys drew her name, they’d get excited because they knew she was going to give them a tough ride but if they could hold on until the horn, they’d have a great shot at being on top of the board.”

Coconut Roll bucked her way to the Canadian Finals Rodeo on 11 occasions and to National Finals Rodeo a total of 10  times. She came by her talents naturally. The genesis of her “Roll” name was her mother Rolly Polly, and her father was famous bucking horse Wild Strawberry – themselves both selected many times for the U.S. and Canadian Finals. For those cowboys who hung on, Coconut Roll carried them to the pay window 114 times. A total of $550,000 has been earned the hard way from a ride around the arena aboard this bareback athlete. Many Stampede rodeo fans will remember the 2006 showdown when Davey Shields Jr rode Coconut Roll for an exceptional score of 91.5 to win the $100,000 jackpot.

Outside of the arena, she was an important part of the natural herd at the Stampede Ranch, explains Marrington. “She was a key mare in our Born to Buck program and is perhaps best known as the natural mother of the Stampede’s top champions bucking horses - Grated Coconut and Kauai Coconut.”

Coconut Roll was retired after the 2010 Canadian Finals Rodeo, and returned to the 22,000 acre Stampede Ranch to roam full-time with the herds she was raised with and that she herself raised. She has continued to be part of the breeding program through recipient mares. A couple of years ago, she developed Cushing’s Disease – an overactive adrenal gland - and was being treated by Stampede veterinarians. Her health and quality of life declined rapidly in recent weeks, and she was humanely euthanized on Wednesday, July 10 at the age of 20.

If you’re curious about our bucking horses, Stampede Ranch or Born to Buck program, feel free to ask questions on our Animal Q and A website.