CALGARY – Dori Westin has gone from the anvil’s ring to Western bling.

The Calgary Stampede’s annual Metal Art Showcase was created a decade ago as a spinoff of the Stampede’s World Championship Blacksmiths’ Competition (WCBC) — and Westin, of Rocky Mountain House, Alta., has had a boot firmly planted in each world, so to speak. 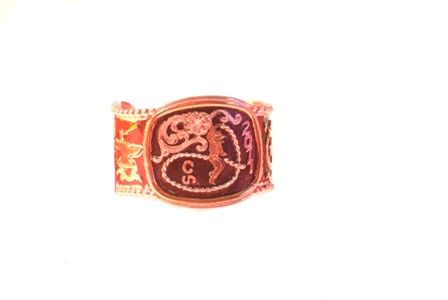 Westin spent half a dozen years as a farrier in the Cochrane, Alta., area in the early 1980s. And after seeing an advertisement for a jewelry-making course in Calgary in 1986, she’s had her Smith ‘n Westin Silver Company shingle out for more than a quarter-century.

As a silversmith, Westin’s forte is in jewelry and buckles. And she’s submitted shimmering artwork for the past several years to the Stampede’s Metal Art Showcase and Metal Art Auction, which will hold their 10th annual edition under the auctioneer’s gavel on Saturday, July 7 at the Victoria Pavilion.

“Sometimes . . . yeah, it is a pretty tedious job. Not as glamorous as one would think,” she says with a laugh. “But it is always a fun process to start with something that looks so blah, and turn it into something so beautiful.

“As you’re making a piece of jewelry, when you’re doing the soldering, it looks all burned . . . but by the time you’re done, you think, ‘Wow.’ The transformation is striking. It’s really something to see.”

With the steady growth in entries over the years, the Metal Art Showcase and Auction will be awarding prize money for the first- and second-place entries in both categories for the first time in 2012. And with a surge in the number of non-forged entries, the prize money has been boosted to match that of the forged category, with a hand-tooled Stampede championship buckle part of the prize package as well.

As a result, the winner in both the forged and non-forged categories will take home $1,500 and a championship buckle, while the runner-up in both classes will claim $750.

There’s a third element to the Metal Art Showcase, too, and this year it will take place earlier in the day on Saturday, July 7 with even more of an air of immediacy.

The Potluck Forging class, part of the WCBC, will take place at 1 p.m. under the Big Top, with teams of one to four blacksmiths given 90 minutes and unlimited scrap metal to create spontaneous works of art.

This year, for the first time, members of the audience will be able to bid on these pieces at a live auction held immediately following the Potluck class, directly outside the west entrance of the Big Top. All proceeds of this sale go directly to the artists.

Traditionally, Westin has submitted one-of-a-kind jewelry for the Metal Art Showcase — a sterling silver and 10-karat gold bracelet with golden spurs and boots, a pendant with a rearing horse and lariat — and was reserve champion in the non-forged class in 2010. However, it’s fair to say that the Smith ‘n Westin Silver Company’s claim to fame — Dori’s maiden name was Smith, by the way — is buckles. She designed the WCBC champion’s buckle for many years, as well as prize buckles for the Canadian National Miniature Horse Show for a spell. She’s produced the championship buckles for the World Professional Chuckwagon Association’s stop in Rocky Mountain House since its addition to the WPCA tour in 2010. And her buckles also adorned the waistline of several Japanese actors involved in the 1990 samurai film Heaven and Earth, partially filmed west of Cochrane.

“I’d gone to Las Vegas for the first year the National Finals Rodeo was held there, and a friend of a friend had done all the buckles for the NFR. It really didn’t click until six or seven months later, when I saw that ad for a jewelry-making course, and I thought, ‘I’ve got to do that,’ ” recalls Westin.

“I worked with silversmiths in New Mexico and Nebraska — hanging out in their shop, seeing how they did it, then coming home and trying to teach myself. I kind of did it the difficult, long way,” she recalls with a chuckle. “But I developed my own style. When I was still shoeing horses, I was selling jewelry out of the back of my truck — and I got busier and busier. I guess what attracted me, originally . . . I have always been really artistic. I used to do a lot of drawing when I was a kid. It kind of confirmed a connection with the Western world.”