Calgary – Anyone who’s ever tried to simultaneously walk and text/read/write can attest to the difficulty of doing two things at once. Now imagine trying to perform precise marching patterns while playing an instrument in unison with 100 of your friends. Calgary Stampede Parade show band participants did just that today and pulled it off flawlessly.This Centennial Year, the competition was fiercer than ever as 25 of the world’s best show bands competed for six titles and prize money. 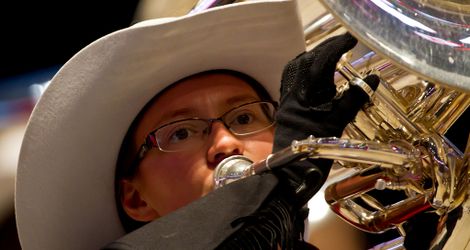 Show bands combine musical elements, dance and choreography and present world-class musical and visual performances. They are judged on a number of elements including what is heard (music), what is seen (visual) and the overall impact of the program’s visual and musical design.

“Judges are looking for very specific elements,” explains Averil Trapp, chair of the Calgary Stampede’s Visiting Bands’ Judging sub-committee. “They pay attention to the amount of training a chosen piece of music requires and evaluate how the band performs the music. This includes items like tone, intonation, rhythm and tempo. Judges also evaluate the level of difficulty involved in the performance’s visual design and how well band members are able to synchronize their movements. This takes a significant amount of spatial awareness and an amazing ability to handle musical equipment.

”The results from the 2012 Calgary Stampede Parade band competition are as follows:

The majority of the bands who performed during the Parade will also demonstrate their skills during the Calgary Stampede, July 6-15, as Calgary hosts the World Association of Marching Show Bands (WAMSB) World Championship.  Up to 50 bands will compete in what is considered to be the largest and most well respected competition of its type.

The World Championship Finals & Awards Ceremony will take place at the Scotiabank Saddledome on July 10 at 6 p.m. and is free with Park admission. For more information, visit csmarchingbands.calgarystampede.com.