The Calgary Stampede was awarded with a Marketing Excellence Alto Award for the We’re Greatest Together campaign at the 12th Annual Alto Awards gala on Monday, October 22, 2012 in Banff. 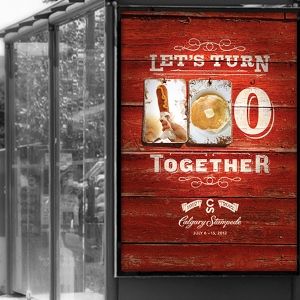 We’re Greatest Together, was an invitation for all Calgarians to get involved in the Centennial Stampede. The campaign’s creative focused on the emotional ties Calgarians have had with the Stampede since 1912.  The use of video and photos from decades ago blended with current representations brought a certain nostalgia to the campaign that touched each person in a different way.

“The Centennial Stampede was a spectacular year. Our marketing and communications efforts placed Calgary on the map and the development of innovative and creative programming provided our guests with an incredible experience. The Calgary Stampede is honoured to receive this award. We work closely with our partners: the Canadian Tourism Commission, Travel Alberta and Tourism Calgary and we truly believe that We’re Greatest Together!” says Karen Connellan, director Consumer Marketing.

The campaign is a platform for how the Stampede, along with its partners, connects and engages with the Calgary community and its visitors.  Each theme had a special connection with how the city of Calgary comes alive during the Calgary Stampede.  Whether it was riding the c-train, dining on pancakes, dancing at the local bar, dressing in your western best or creating Stampede memories, the goal of the campaign was to evoke emotion and show the world We’re Greatest Together.

The Stampede was awarded the Marketing Excellence Alto Award in the campaign or project budget over $25,000 category. The awards recognize creative marketing campaigns that encourage travel to, and within, Alberta. Emphasis is on original and effective campaigns that push the boundaries of common marketing practices and result in greater than expected return on investment.