Calgary Stampede evenings are heating up with Barnburner 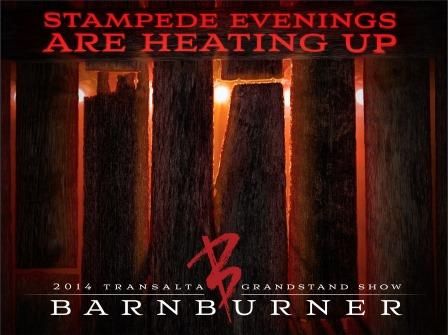 Calgary – The 2014 Calgary Stampede TransAlta Grandstand Show, Barnburner, will celebrate the heritage and stories of chuckwagon racing by inviting the audience to come home to the excitement and celebration of a distinctly western party. History meets excitement in Barnburner and for 10 days Calgarians and visitors will see the most technological show ever created by the Calgary Stampede, right down to the biggest fireworks show the Stampede has ever blown up.

“We have taken the Evening Show in a whole new direction,” says Dave Pierce, creative producer, Calgary Stampede. “We have assembled a creative team that is second to none. Barnburner promises to make the Calgary Stampede experience one-of-a-kind every night.”

Each evening, after the final heat of the GMC Rangeland Derby, legendary chuckwagon driver Tom Glass will bring the party from the barns, to the stage of the Grandstand. The Young Canadians of the Calgary Stampede will be joined on stage by an international cast who will bring the stage to life through musical performances, extreme acrobatics and urban, stomp and freestyle dance.

Every summer for almost a hundred years, families loaded up their horses, hooked the trailer to the truck and for four months, drove across Western Canada to race their wagons around the chuckwagon tracks. Once every summer, families got ready for the biggest race and the biggest payday in the sport - The GMC Rangeland Derby at the Calgary Stampede.

“This year our Grandstand Show celebrates those families,” says Pierce. “Every night, once the races have finished, if you took a walk around the track to the barns and waited for the chores to be finished, if you were lucky - they’d let you stay for the party and you’d be part of a real Barnburner.”

Tickets for the TransAlta Grandstand Show, Barnburner begin at $56. Every ticket includes a seat to the GMC Rangeland Derby and an amazing vantage point for the nightly fireworks. Tickets can be purchased online now at calgarystampede.com/tickets.

A listing of the entire creative team with bios is included in the backgrounder. For more information, please visit www.calgarystampede.com.