Since the first Stampede in 1912, the Indian Village has enabled the five tribes of Treaty 7, the freedom to reinforce and celebrate their culture and to proudly share it with the world. 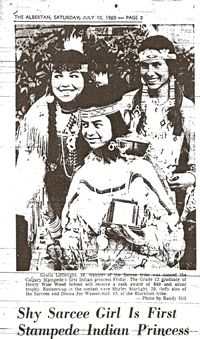 In 1965, there was the need for an Indian Princess to act as an ambassador for the Indian Village. Eighteen year-old Gloria Little Light from Tsuu T’ina was selected as the first Indian Princess She was chosen for her appearance, regalia, participation in Indian events and general interest of Indian Village.  She greeted guests from all over the world at the Big Four Building during the Stampede.

The Calgary Stampede Indian Princess Program was founded on the principle that the future of the Treaty 7 First Nations is dependent upon the leadership qualities of today’s youth. The program is designed to create and maintain a system that will enhance career opportunities and produce role models who represent the positive qualities of First Nations people.

Forty-seven years later, the Indian Princess Alumni has grown into a diverse collection of amazing women who have made invaluable contributions to the continued growth and success of the Calgary Stampede Indian Princess Program.  The Alumni is looking forward to their historic 50th Anniversary in 2015!

Each year, an incredible young woman from one of the five tribes of Treaty 7 (Tsuu T'ina, Piikani, Stoney, Kainai and Siksika Nations) is selected to serve as the official representative of Indian and the Calgary Stampede at over 350 appearances during her year.

Now, the search for the 2013 Calgary Stampede Indian Princess begins!

We encourage women of Treaty 7 nations between the ages of 18-24 to challenge themselves for the once-in-a-lifetime opportunity to reign as the Calgary Stampede Indian Princess.

For more information or to obtain an application, please contact Jayne Nicholson at 403.261.0137 or via email at indianprincess@calgarystampede.com.

The Calgary Stampede Indian Village is presented through the generous support of PENN WEST EXPLORATION who are committed to sustaining relationships with Aboriginal communities built on respect, openness, honesty, integrity and trust while working together, to develop mutually beneficial community, education and economic opportunities.  www.pennwest.com/sustainability/aboriginal-relations.html