Calgary Stampede Parade Marshal Chris Hadfield – out of this world!

Calgary Stampede Parade Marshal Chris Hadfield – out of this world!

Calgary – The Calgary Stampede is launching into its second century and is excited to announce the 2013 Stampede Parade Marshal will be the first Canadian Astronaut to walk in space and the first to command the International Space Station (ISS)–Canadian Space Agency Astronaut Chris Hadfield. 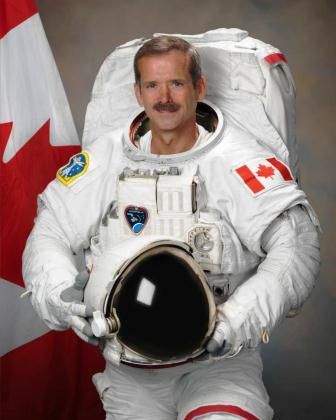 “The Calgary Stampede is an iconic event; to be asked to lead the Parade is an incredible honour,” says Hadfield. “Going from zero gravity to horse-back is going to be a huge adjustment, but I’m up for the challenge.” On December 19, 2012, Hadfield launched aboard a Soyuz spacecraft to the ISS and he will return to Earth on May 13.

“We are thrilled Commander Hadfield will be leading our 2013 Stampede Parade,” says Thompson. “Commander Hadfield is truly a Canadian icon, a Canadian hero. He’s done remarkable work sharing experiences from the International Space Station and creating a community to celebrate and behold our planet. I believe that parade goers will join in on the opportunity to recognize and celebrate this incredible Canadian, especially so soon after he returns to earth.”

Commander Hadfield has shared his space and science experiences with thousands through the use of social media.  He has built a substantial global audience including more than 165,000 likes on Facebook and 745,000 followers on Twitter by sharing his photos, stories and videos with the world.

The Calgary Stampede is July 5-14, 2013 and the Parade begins at 9 a.m. on Friday, July 5.  For more information please visit CalgaryStampede.com.

As we enter our second century, the Calgary Stampede celebrates the people, the animals, the land, the traditions and the values that make up the unique spirit of the west.  The Calgary Stampede contributes to the quality of life in Calgary and southern Alberta through our world-renowned 10-day Stampede, year-round facilities, western events and several youth and agriculture programs. Exemplifying the theme “We’re Greatest Together”; we are a volunteer-supported, not-for-profit community organization that preserves and promotes western heritage and values.  All revenue is reinvested into Calgary Stampede programs and facilities.