Calgary Stampede Parade to be led by a true Cowboy

Calgary Stampede Parade to be led by a true Cowboy

Calgary – The Calgary Stampede is pleased to announce internationally acclaimed singer-songwriter and a true cowboy, Ian Tyson will be the 2012 Calgary Stampede Parade Marshal. Tyson’s professional career has spanned a remarkable five decades and his love of western heritage is well known. In addition, the Stampede will honour its historical partnership with the tribes of Treaty Seven First Nations by inviting the seven chiefs of Treaty Seven to ride as Honourary Parade Marshals. 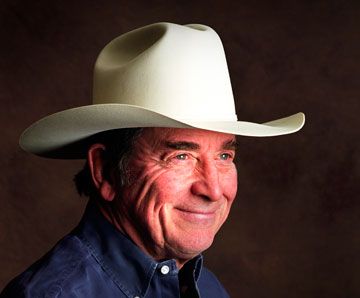 “This is truly a special year and I’m pleased we have the opportunity to recognize the people who’ll be at the front of our Centennial Parade,” says Mike Casey, president and chairman of the board, Calgary Stampede.  “Our Parade Marshal is someone who symbolizes western heritage and values, is an iconic Canadian and someone who embodies the Calgary Stampede.  And as we get set to celebrate our centennial, I’m thrilled to have the seven Honourary Parade Marshals join us as they represent a relationship that started 100 years ago and remains strong today.”

Throughout his fifty year career Tyson has held true to his rural roots and values.  From his start as part of a legendary folk duo to a successful solo career reaching platinum status, Tyson has achieved a number of honours, including The Order of Canada and being inducted into five industry Halls of Fame.

“The Calgary Stampede has always been close to my heart,” says Tyson. “I am honoured to have been asked to be the Parade Marshal and for the Centennial Stampede no less.”

Joining Tyson at the front of the the Parade, will be seven extraordinary leaders from the Treaty Seven First Nations: Chief Charles Weasel Head of the Kainai Nation and Grand Chief of Treaty Seven; Chief Fred Rabbit Carrier of the Siksika Nation; Chief Gayle Strikes With A Gun of the Piikani Nation; Chief Sanford Big Plume of the Tsuu T’ina Nation and from the Stoney Nakoda Nation; Chief Bruce Labelle of the Chiniki Band; Chief Ernest Wesley of the Wesley Band and Chief Darcy Dixon of the Bearspaw Band.

First Nations have played a prominent role in the Calgary Stampede since 1912 when 1,800 members of the Treaty Seven led the Parade at the request of Stampede visionary, Guy Weadick.

“The Stampede Parade Marshal is one of our oldest and proudest traditions,” adds Casey.  “They not only lead the Parade, but act as a reflection of the values and culture of the community.  It is not an easy role to fill – but I think we have succeeded.”

The Calgary Stampede Parade is Friday, July 6 beginning at 9 a.m. and it will set the stage for the Centennial version of the Greatest Outdoor Show on Earth, July 6–15.  For more information please visit CalgaryStampede.com.