The Award of Distinction for Innovation honours those “who have developed a new process, product or source of knowledge that has made a significant impact on improving the welfare of livestock care and the industry.” 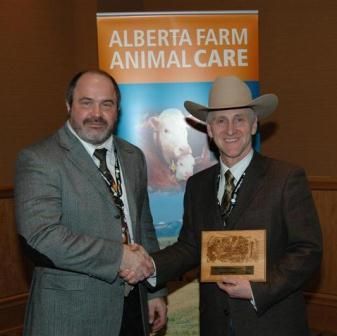 “The Calgary Stampede is passionate about animal care. We have 7,500 animals on Stampede Park every year, and we take the responsibility of their care very seriously,” said Paul Rosenberg, vice-president, Programming, who accepted the award on behalf of the Calgary Stampede.

The goal of the Alberta Farm Animal Care association is to improve animal handling and promote responsible animal care.

Grounded in over a century of tradition in agriculture, the Calgary Stampede has held true to its promise of being vigilant about animal care.

The Stampede established an independent Animal Care Advisory Panel in 2010 to effectively guide and enhance its animal care practices. Other initiatives undertaken by the Calgary Stampede include developing codes of practice and carrying out both internal and third party assessments on animals in transportation, agricultural exhibits and in the rodeo and chuckwagon events.

The Stampede has also introduced a framework that provides a sound foundation for ongoing assessments, benchmarking and the ability to adapt to the changing environment around animal care.