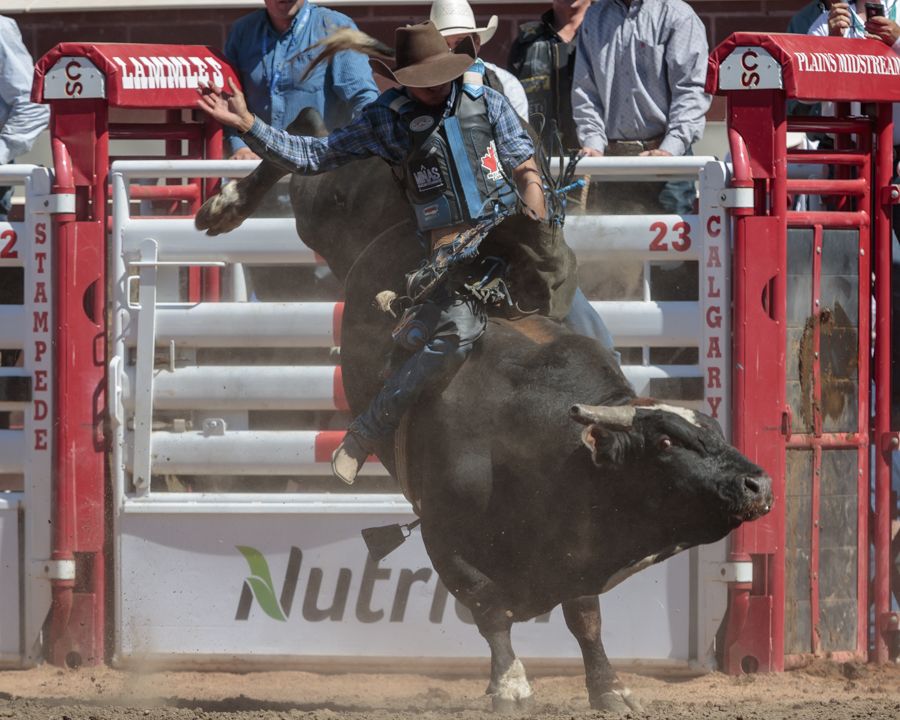 They were making a cash call Friday at the Calgary Stampede and only four contestants in each Pool B event were able to answer. Those with the biggest bucks were rewarded with a pass through to Showdown Sunday, while the rest face the intense competition on Wild Card Saturday.

For the second day in a row, it was a Brazilian bull rider who laid claim to the first place prize money in the round, keeping  the Brazilian translator busy. But this time it was Marcos Gloria who made his way to the stage for a bronze, after an impressive 90.5 point ride on the Vold bull Whiskey Hand. The $5500, plus the victory, gave him in the edge to advance out of Pool B to Sunday.

“That was a difficult ride, but that’s all I needed, I’m very happy. That’s all I need today,” Gloria said in Portuguese, with a big grin that needed no translation." Gloria now has an Edmonton address, and calls Canada his second home. He’s thrilled to have the opportunity to ride on Sunday, when more than a million dollars is handed out. Cody Nance wound up the number one earner in the bull riding Pool B standings, with $10,500, followed by Sage Kimzey with $10,000, then Ramon De Lima at $9500. Gloria, J.B. Mauney, and Jess Lockwood all had $8000 each, but because he won the most in any one round, Gloria gets the bye.

It may have been too little, too late, but for Shane Hanchey, winning Friday’s go-round was a psychological triumph. The 2016 Stampede winner hadn’t won a dime heading into Friday’s action.

Barrel racer Hailey Kinsel keeps getting faster at the Stampede, once again topping her previous fast time. She stopped the clock at 17.04 seconds, just five-hundredths of a second away from the record

“My first (barrel) was a little better again and I felt like I stayed good on my second, but my third I still let her out a little bit too much on the back side of it, trying to get out of it,” analyzed the Texan. “I need to fix that just a bit. The other two I wanted to be a little bit tighter today so that I could finetune things before Sunday.” Kinsel finishes with the highest earnings of any Pool A or B competitor at $21,000. Joining Kinsel as Pool B qualifiers are B.C.’s Carman Pozzobon ($15,000); Jessica Routier ($10,500) and Carley Richardson ($7000).

There’s just no catching saddle bronc specialist Ryder Wright. For the third straight day he took the victory lap. This time he was 89 points on Franklin’s Evening Mist.

“It felt really good,” said Wright. “That horse was kind of jumping back and forth and I felt solid the whole time. Those are the best feeling ones when you’re spurring them like that, those ones that’ve got moves.” Wright closes out his Pool B time with $20,000, followed by his brother and fellow qualifier Rusty Wright ($12,500); Wade Sundell ($9250) and Cort Scheer ($9000).

Texan Matt Reeves made sure he got Saturday off by winning the steer wrestling round in 3.5 seconds.