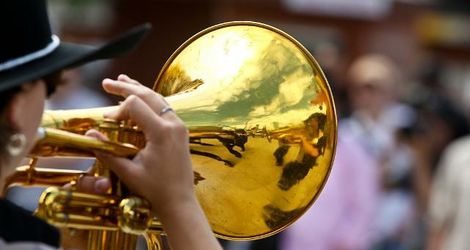 Calgary - It is a first-ever prestigious win for Canada. Then again, “first-evers” are becoming commonplace for the Calgary Stampede Showband, having recently solidified their position as the most successful-ever marching showband organization in the world.

The Calgary Stampede Showband has been awarded the prestigious international Sudler Shield from the John Phillip Sousa Foundation based in Indiana, USA. The annual award recognizes long-term world-calibre excellence in a youth band. The formal presentation was made on Sunday, February 2 at the Rozsa Centre at the University of Calgary during the Showband’s “Community Celebration” concert. The Shield has been awarded to predominantly American showbands along with a handful of Japanese, Thai and Dutch bands, but never to a Canadian band before now.

“What a fitting cap to a great run of awards over the past couple years, and an incredible validation that our people and performers are among the best in the world,” enthused Mike Jewitt, director of bands for the Calgary Stampede Foundation. “The Sudler Shield recognizes long-standing excellence, which is only growing and strengthening at the Stampede Showband. I am so excited to work for organization that truly believes in youth development and stands by that commitment for the long-haul.”

This award comes on the heels of the Calgary Stampede Showband winning their second straight world championship at the World Association of Marching Show Bands in Japan in 2013– the first-ever back-to-back wins in the competition.  Their recent win sets a record as the most WAMSB championship titles ever awarded to an organization (1996, 2002, 2012, 2013).

Robert Ecklund, head of the World Association of Marching Showbands, made the presentation during Sunday’s concert.  He notes the Calgary Stampede Showband was selected by a jury of university music professors and award-winning band directors, and that the award demonstrates the highest standards of excellence.

The Calgary Stampede Showband is composed of 124 musicians and dancers aged 16 to 21 years old, who perform more than 200 times each year in the community and around the world. The Calgary Stampede Foundation supports the program, designed to develop youth excellence and opportunities within the field of performance arts.

Since its inception in 1994, the Calgary Stampede Foundation has worked to preserve and promote western traditions, culture and heritage through charitable giving as well as promoting and advancing character-building youth programs. The Foundation is currently working with community leaders and philanthropists to develop world class programs and facilities that ensure our western legacy is preserved for future generations. The Calgary Stampede is a shareholder of the Foundation, which is responsible for a number of youth-oriented programs including Stampede School, the Calgary Stampede Show Band and The Young Canadians School of Performing Arts.