This August, fresh off their second consecutive World Championship win, the Calgary Stampede Showband arrived to the Calgary airport to a cheering crowd, colourful posters, balloons and hugs all around. It was their fourth world championship. 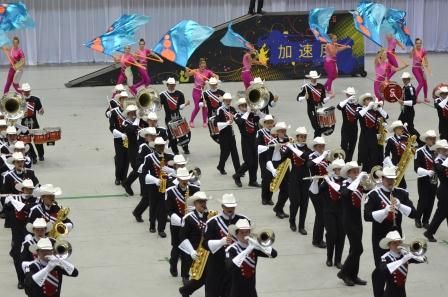 Since they were selected last September, the 124 members put in 101 rehearsal days, approximately 578 hours. Through the year, members undergo not only intense musical training, but also rigorous physical conditioning—it’s not easy to swing a 30 pound tuba in a beat.

Their competitive performance was entitled “Momentum” which roughly translates to “Kasokudo” in Japanese, or “to progress through different stages of speed and velocity.” The 2013 show explored various concepts of momentum including weight, speed, force, chain reactions and collisions.

The Showband transported 69 crates of equipment that weighed more than 15,000 pounds to Japan not including their personal luggage. Before their three competitive performances, they visited the Yamaha factory where their instruments are made, performed at  Disney Sea and a fireworks show dedicated to all those that had been born and died since the 2011 Tsunami.

“The international performances and competition are not just about winning championships—the experience is full of intangible lessons,” said Mike Jewitt, Stampede Showband director. “We believe success is built on people working together toward a common goal.”

The Showband is funded by the Calgary Stampede Foundation and each member receives a $6,000 scholarship (which fully funds their year with the band). Through artistic instruction, members learn the life principles of commitment, compassion, stewardship and accountability. They make more than 200 appearances in the community and around the world every year.

You can catch the Showband at the CIBC Run for the Cure on Sunday, October 6, or at the Optimist Christmas Concert on Wednesday, December 4, 2013.