Calgary – We’re Greatest Together, the Calgary Stampede’s heart-felt Centennial theme, burst into reality over the noon hour as thousands of Calgarians gathered at Olympic Plaza to help launch the 100-day kick-off to the 2012 Calgary Stampede. Wearing their finest cowboy hats, boots and blue jeans, Stampede fans gathered downtown to celebrate The Greatest Outdoor Show on Earth and the fact that the 100-year celebration is just on our doorstep. 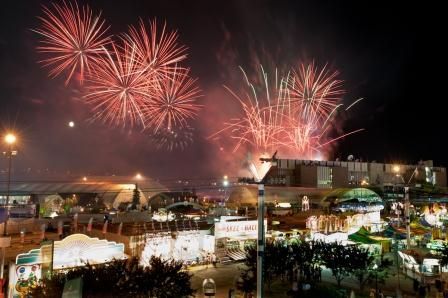 “This party has been 100 years in the making and it’s outstanding to see the support of so many Calgarians,” says Mike Casey, president and chairman of the board, Calgary Stampede.  “A lot of hours from both Stampede volunteers and employees have gone into making this year’s show a historical event for the Stampede and this great city.”

The Calgary Stampede proudly announced the 2012 Parade Marshal will be the legendary Ian Tyson.  Tyson, recently awarded The Order of Canada, has performed on stages around the world while staying true to his rural roots and values.  In addition, the Stampede will honour its historical partnership with the tribes of Treaty Seven First Nations by inviting the seven chiefs of Treaty Seven to ride as Honourary Parade Marshals.

The Stampede has been promising a massive city-wide celebration this year and there’s no better way to celebrate than with fireworks. Picture the dynamic fireworks display every night during the TransAlta Grandstand Show, then imagine those brilliant fireworks in all four quadrants of the city. For six of the ten nights this Stampede, Calgary will come alive with Light up the City, presented by TransAlta, Canada’s largest synchronized pyrotechnics display.  The simultaneous displays will take place at WinSport’s Canada Olympic Park, Heritage Park, McCall Lake and Elliston Park.  Thousands of Calgarians will be able to view the fireworks from their own neighbourhoods, with accompanying music on the radio courtesy of our media partners Corus Entertainment. More details about the Stampede’s Light up the City celebration will be released in June.

Also announced were a number of Calgary Stampede firsts including a new gathering place to celebrate the Calgary Stampede Centennial.  The Bell Centennial Plaza will not only be home to the Centennial zip line, but also a new stage featuring both local and international entertainment.  Part of the roster will include some of the best of Calgary’s music festivals including Calgary Folk Fest, Calgary Blues Festival and Sled Island music festival.  It will also welcome international illusionists and finalists from Australia’s Got Talent Adam and Selina.

For the first time, Stampede visitors will have an opportunity to surf, right inside the BMO Centre.  Flow Rider is part of the brand new Beach exhibit to the Stampede that will have guests carving up the waves throughout the ten days of Stampede.

In addition, for the first time in history, the Stampede will present an Enmax Corral Show that will captivate audiences from beginning to end.  The Calgary Stampede brings you, Tails - Three horses, One Legend. More information on Tails will be announced at the official launch on May 1, 2012.

Tickets for the 2012 Calgary Stampede are selling at a record pace. And today the Stampede is pleased to announce a special ticket offer that will be on sale Friday and Saturday, March 30 and 31 only. On those two days you can buy tickets to the opening day of the Stampede Rodeo, July, 6 for only $20.12 plus applicable fees and taxes. Tickets will be available on line, or through the Stampede ticket office.

Planning your Stampede just got easier with today’s launch of the new Calgary Stampede website. The mobile-enabled site will feature easy navigation and improved planning tools.

One hundred years is a long time and from those hundred years we have a lot of stories to tell.  Watch for 100 days of Calgary Stampede news beginning today.  Media releases, advisories and PSAs will be sent in addition to tips, fun facts and story ideas on our @cs__media Twitter handle.