Calgary, AB - Canada Post is marking this year’s centennial of the Calgary Stampede in style by issuing two commemorative stamps that celebrate the city’s pioneer spirit and western culture. The two stamps, featuring a rodeo horse and a silver-and-gold anniversary belt buckle, are available in post offices, online and via phone orders starting today. 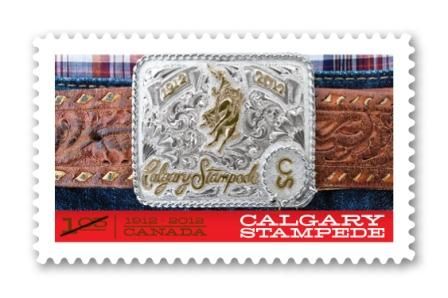 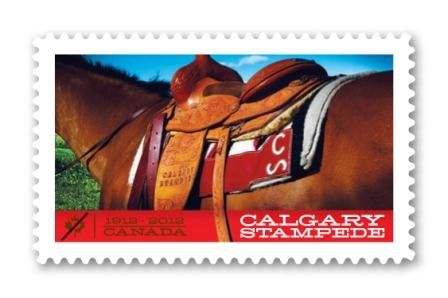 “Given the Stampede’s place in Western Canadian culture, it is fitting that we mark the event’s 100th Anniversary in a number of important ways,” said the Honourable Jason Kenney, Minister of Citizenship and Immigration and Member of Parliament for Calgary Southeast. “These stamps are beautifully designed and truly capture the heart of the Calgary Stampede.”

“It is an honour to have Canada Post create two stamps to commemorate the Calgary Stampede’s Centennial year,” says Deanne Carson, vice-president Marketing and External Relations, Calgary Stampede. “The Stampede has become a cultural touchstone in Canada and around the world; it is an event that everyone can take part in.”

For the first time, anyone who owns a smartphone or tablet will also be able to enjoy the digital side of stamps with the introduction of Augmented Reality (AR), an enhanced view of a physical, real-world environment whose elements are augmented by computer-generated “virtual elements” such as sound, video, 3D graphics, web-based information or GPS data. By downloading the free Stamps Alive! app, users will be able to hover their device over the stamp and access either a barrel race game or an interactive experience with a horse. The interactive content was created by Ad-Dispatch, a 12-year-old Halifax-based company, which has worked with many of North America’s finest marketing agencies and big brands like Chevrolet, Walmart, Marvel, Disney and the Home Depot to create memorable and meaningful consumer experiences using Augmented Reality technology.

“The Calgary Stampede is a great source of western and Canadian pride,” says Jim Phillips, Director of Stamp Services for Canada Post. “We are also very proud to be among the first postal administrations in the world to connect stamps – a very traditional tool – with the latest technology and hope this will bring newfound interest in the world of stamp collecting.”

The domestic-rate PERMANENT™ stamp features a powerful standing rodeo horse. A second U.S.-rate stamp showcases the silver-and-gold anniversary belt buckle created by Alberta artisan, Scott Hardy.  Only 100 limited-edition buckles will be produced. The stamps were designed by Calgary artist Xerxes Irani, who has been creating logos and other print material for the Stampede for more than a decade.

An archival photograph of the late Guy Weadick, the cowboy who was the driving force behind the establishment of the Stampede, appears on the U.S. booklet cover. Weadick was a Wild West performer on the vaudeville circuit across North America at the turn of the 20th century. He travelled to Calgary where, together with several wealthy cattlemen who became known as the “Big Four,” he founded the Stampede in 1912.