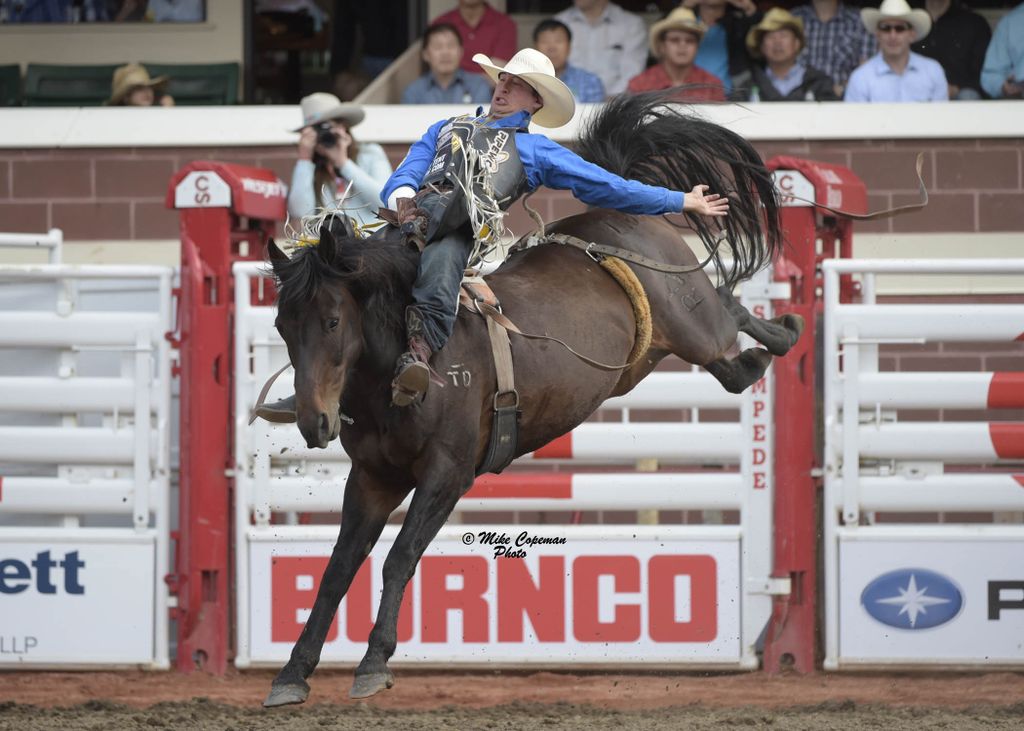 “I can’t believe I jumped out and won the round. The way I’ve been feeling, it doesn’t feel like I can ride right now to what I’m capable of doing,” said Vold. “But I’m trying to do mind over matter, and I’ll take it, I guess.”

The fact he was even riding at all, let alone winning, is hard to imagine.

“I’ve got separated ribs, some cartilage damage, and now they think I maybe did some muscle damage in my abdomen.”

“I didn’t want to miss Calgary. I had four days (after Ponoka) and I got better and better. I knew with the (Canadian Pro Rodeo Sports Medicine) Team here, they’d be able to take care of a guy, but it’s just kind of getting to the point where there ain’t nothing they can do for it anymore, so I don’t want to keep hurting it.”

The incredible Mary Burger and her horse Mo worked their magic again Sunday afternoon. For the third day in a row, they clocked the fastest time of the day, with an 18.08 second run, which resulted in a rare standing ovation from the grandstand crowd. Burger is way out in front of Pool A, with $16,500, the most of any Pool A contestants in any event.

Not far behind is Wyoming steer wrestler Seth Brockman. He collected his second straight bronze for winning the round in 4.0 seconds, pushing his Stampede earnings to $15,500.

“I’d say the main thing is momentum. The end of my fourth (of July run) things got rolling, and I was able to win a second the first day here. I think momentum’s everything, so just keep it up.”

Brockman, at just his second Stampede, describes what riding that wave is like.

“You can’t wait to get to the next one. Tomorrow can’t come fast enough.”

Cort Scheer from Nebraska is the man gathering more than his share of the saddle bronc earnings, but Sunday was his first victory lap around the arena this year, after he marked 84.5 points on the horse Northern Lights. He’s got $14,000 on the top of Pool A.

In a day when cowboys conquered the bulls, there was a tie for first. Dakota Buttar of Saskatchewan was 87.5 points on a bull called Preacher, but Chandler Bownds of Texas matched that score on Sugar Smack, so they split the pot, collecting $5000 each. But the man on top in the bull riding for Pool A is the PBR’s newest sensation, Ryan Dirteater of Oklahoma, who has been to the paywindow every single day, and he has $11,500 in his Stampede bank account.

World champion Caleb Smidt of Texas switched horses Sunday in the tie-down roping, and got the job done in 7.2 seconds, to be fast man of the round and collect his first cash of the Stampede. He still has to do some winning Monday if he wants a Pool A pass to next Sunday, because he’s outside the top four, where Shane Hanchey is still the leader with $10,000.

Monday means the last chance for Pool A competitors to secure a spot among the top four money winners, which gives them a seat at Showdown Sunday. The others get one more chance to earn their way there on Wildcard Saturday. Pool B contestants begin their Stampede on Tuesday.