CALGARY – Few Canadian cutters, if any, have carved out a throne like the one occupied by Dr. Denton Moffat. Still, says Moffat, winning one of these seats would be a real treat. 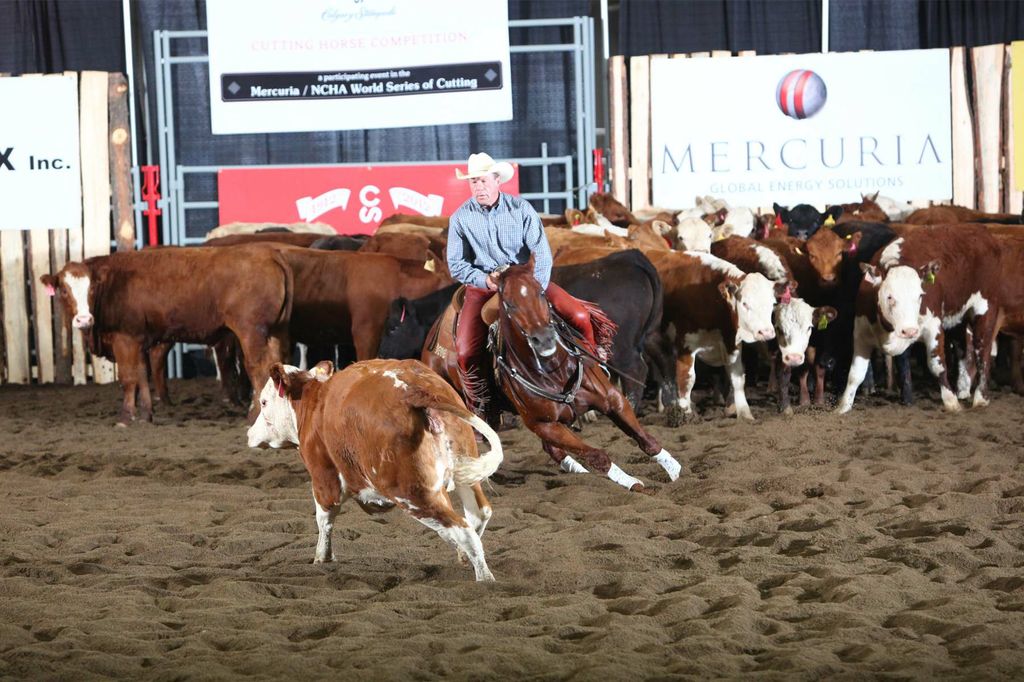 There’s a special incentive to this year’s Calgary Stampede Cutting Horse Futurity, presented by Wrangler — and that’s the final seven Centennial Trophy Saddles going up for grabs as part of the Stampede’s 100-year birthday bash.

Earlier this year, the Stampede’s Western Performance Horse Committee commissioned the production of 25 limited-edition Centennial Trophy Saddles, handcrafted by world-renowned Vic Bennett Saddles of Sherwood Park, Alta., for various champions in 2012 — a move made possible by using some of the proceeds of the Centennial Saddle program. During the Stampede’s 100th anniversary in mid-July, 18 of these coveted trophy saddles were awarded to winners in Western Performance Horse marquee events — the Team Cattle Penning Competition, presented by Calfrac Well Services; the Cutting Horse Competition; and the Working Cow Horse Classic, presented by Tesla Exploration Ltd.

The final seven Centennial Trophy Saddles will be dangled during the Cutting Horse Futurity, presented by Wrangler — which takes over the Stampede Corral from Oct. 10 through 14, and features $100,000 in added prize money. They’ll be awarded to the Open and Non-Pro champions in each of the Futurity, Derby, and Classic/Challenge classes, as well as the winner of the 7-Up class.

“It would be nice to win one of those remaining saddles, for sure,” says Moffat, a cutting-horse trainer and equine veterinarian based in Armstrong, B.C. “I’d be giving the trophy saddle to the horse’s owner, but it would definitely be a huge honour.”

Among the Canadian crowd, there’s hardly a bigger threat to win the Stampede Futurity’s Open categories — designated for trainers and professional cutters — than Moffat, who estimates he’ll be bringing anywhere from seven to 10 client horses in tow from the B.C. interior.

Not only is Moffat a multi-time champion in both the Stampede Futurity and the Stampede’s Cutting Horse Competition — he’s also a member of the Fort Worth, Texas-based National Cutting Horse Association’s (NCHA) Rider Hall of Fame, and he’s racked up an estimated $1.291 million in career NCHA earnings since he first entered the cutting arena back in 1981. The only other Canadians who can make those sort of claims are the Hansma brothers, Paul and Winston, who were raised in Alberta but have been based for years in Weatherford, Texas.

“I’ve probably trained between 800 and 900 different horses — roughly 20 to 30 a year, although not quite that many now,” he says. “The cutting world has been very good to me.”

The Stampede’s Cutting Horse Futurity features Open and Non-Pro rider categories — Open for horse trainers and pros, and Non-Pro for those who make no part of their income by training horses. Non-Pro entries can only ride horses owned by themselves or immediate family members.

Equine age classes are headlined by the Futurity category for three-year-olds, and also include Derby (four-year-olds) and Classic Challenge (five- and six-year-olds). On the Non-Pro side, there’s also the 7 Up class for horses aged seven years or older. A $50,000 Limit Amateur Class, for those with NCHA earnings of less than $50,000 as of Jan. 1, 2012, is also offered within Non-Pro’s Derby and Classic Challenge classes.

Historically, Moffat’s greatest partnership came was with Docs Lena Doc, a blue roan stallion owned by Calgary’s Mike Prew. With Moffat in the saddle, Docs Lena Doc was named Reserve World Champion Cutting Horse at the 1989 NCHA finals in Houston. The pair also teamed up for the Canadian Cutting Horse Association’s (CCHA) open high-point title and Canadian championship three years running, from 1987 through 1989, and snared the CCHA open title again in ’94 and ’95.

“It’s all about the passion to ride and train and compete,” says Moffat, who claimed Open Futurity in 2005 on Cods Six Cat, and Open Derby in 2006 aboard Peppers Fancy Page, at the Stampede’s fall cutting extravaganza. “And there are so many variables that make it interesting — the ground, the cattle, the four people who help you (herd holders and turnback riders), the way the judges look at it that day, the way your horse performs, and, ultimately, the way you perform. Any trainer has to have a passion for it, because there are lots of ups and downs.”

The Stampede’s Futurity event showcases the pure athleticism, instinct, agility and intelligence of the cutting horse. With horse-and-rider teams attempting to cut at least two, and most often three, individual cows out of a herd within 150 seconds, cutting has evolved into one of the most exciting equine events in North America. Contestants are evaluated by a panel of three judges and assessed a score based on the horse’s instinctive reactions, the challenges made by the cows cut, and any errors in judgment.