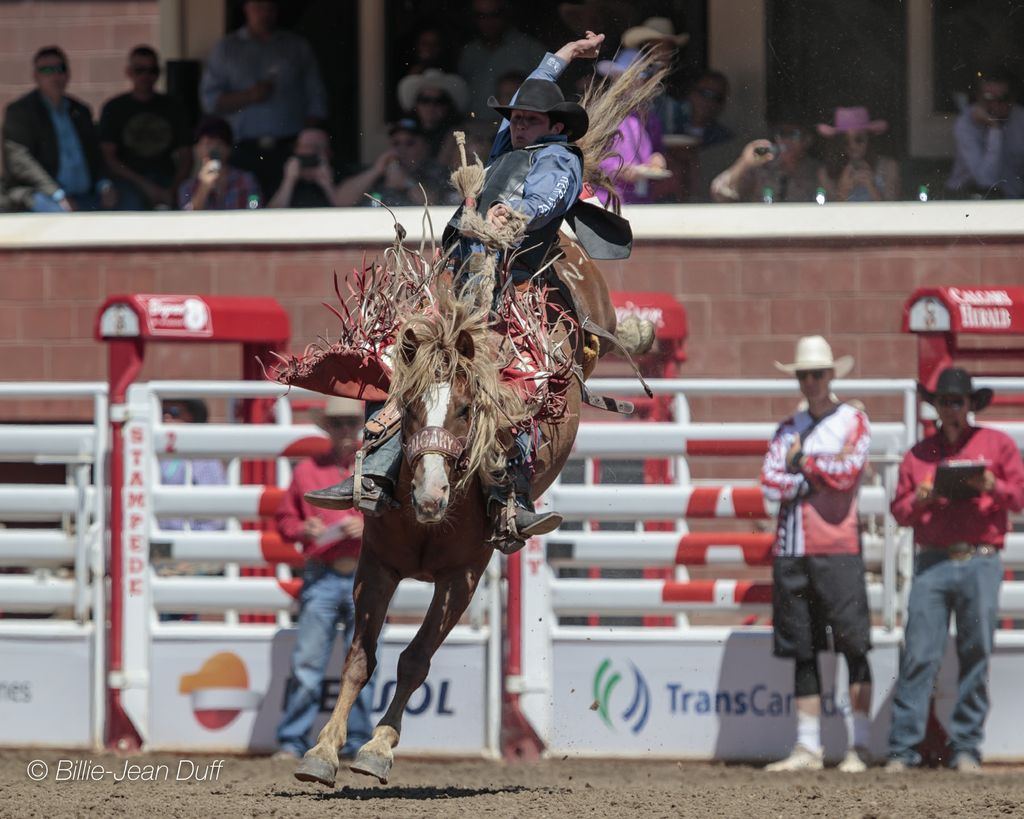 Wild Card Saturday at the Calgary Stampede is a high stakes race where only two of the dozen contenders in each event ride, wrestle, rope or race their way to a last-minute booking for the richest day in rodeo – Showdown Sunday. Canadian fans in the grandstand were extra excited to see three Alberta competitors among those moving on.

Saddle bronc rider Layton Green made it all the way to the Final Four last year at the Stampede, but his odds of repeating that looked long. That is, until he nodded his head for Calgary’s Nutty Champagne Saturday. The man from Meeting Creek rode to a mark of 86.5.

“I had a great horse. I’d never been on her before. I was happy to have her. I knew it was going to dang sure take some points to get back. Everybody rides so good, it’s usually stacked in there pretty close, so I was just happy to sneak in there.”

Sterling Crawley of Texas secured the other Wild Card spot, when he turned in an 87.5 point ride on another Calgary horse, Zorta Proud. In addition to the Sunday qualification, Crawly picks up $6000, while Green gets $5000.

Scott Guenthner breathed a sigh of relief. After making a tidy 4.4 second steer wrestling run early in the go, he had to leave his fate in the hands of the others.

“I went fourth out and having to wait for the rest of those six or eight behind you, is a long day. And you’re on a spotlight, so you can’t make horrible faces,” he laughed. But the wait was worth it, when his time was only bumped back once, giving him a berth for Sunday’s action. Guenthner earned $5000 for second place on the day, but Louisiana’s Rowdy Parrot got the $6000 for being in a tenth faster at 4.3.

Jordan Hansen had a last chance and a second chance in the bull riding. The Ponoka cowboy had one more shot at qualifying for Sunday, and he entered into a rematch with the bull who’d thrown him off on Monday, called Big Red.

“That bull, he’s a smart bull, and he never really has the exact same trip,” acknowledged Hansen, who grew up in Okotoks. “He’s a great bull every time.” This time the cowboy got the upper hand and stayed firmly seated until the whistle blew, causing the judges to hand out the biggest score of the day at 88 points, worth $6000 for first. Considering Hansen’s first bull at Calgary was the first one he’d climbed on in nearly three months after being on the injury list, and now he’s making his first trip to Showdown Sunday at the Stampede, it’s been quite a week. Coming in just one point behind Hansen was Stormy Wing of Texas, who marked his 87 on Muddy Water, making his first cheque of the Stampede a $5000 one.

Nellie Miller and her horse Sister made a smooth run around the barrels in 17.30 seconds, for the first place $6000 Wild Card Saturday bonus.

“It was the run we’ve been waiting for all week. It just came together today which was perfect, because it was our last chance. My horse seems to do better the more runs you make in one place and so today she finally felt at the top of her game,” said the California barrel racer. Just a tenth behind her was Kellie Collier of Texas, who was over the moon about making it back on her mare Lolo.

“Yea, I guess I told you the other day that I wanted to win this round and be back here talking with you again today. Thoughts become things and it worked out.” The Utah cowboy got to meet up with Witless Margie again, the same horse he’d had as a reride last Sunday at Calgary. Bennett marked 87.5 points for best in the round and $6000, while Clayton Biglow got the nod to advance for his 87 on Mayhem. Cole Goodine also recorded an 87 mark, but Biglow had more money collected heading into Saturday, which served as the tiebreaker, making the California cowboy a happy man.

A pair of past Stampede champions made it back to Sunday in the tie-down roping, with Matt Shiozawa topping the round in 7.1 seconds for a $6000 payday, while Timber Moore was the next fastest at 7.5, for $5000.

And it was a special Stampede moment when fellow bull riders and the the packed grandstand got a chance to salute and say so long to veteran bull rider, Scott Schiffner, who won the Stampede in 2001. Earlier this week the Strathmore cowboy announced his retirement, making this his last Stampede as a contestant. 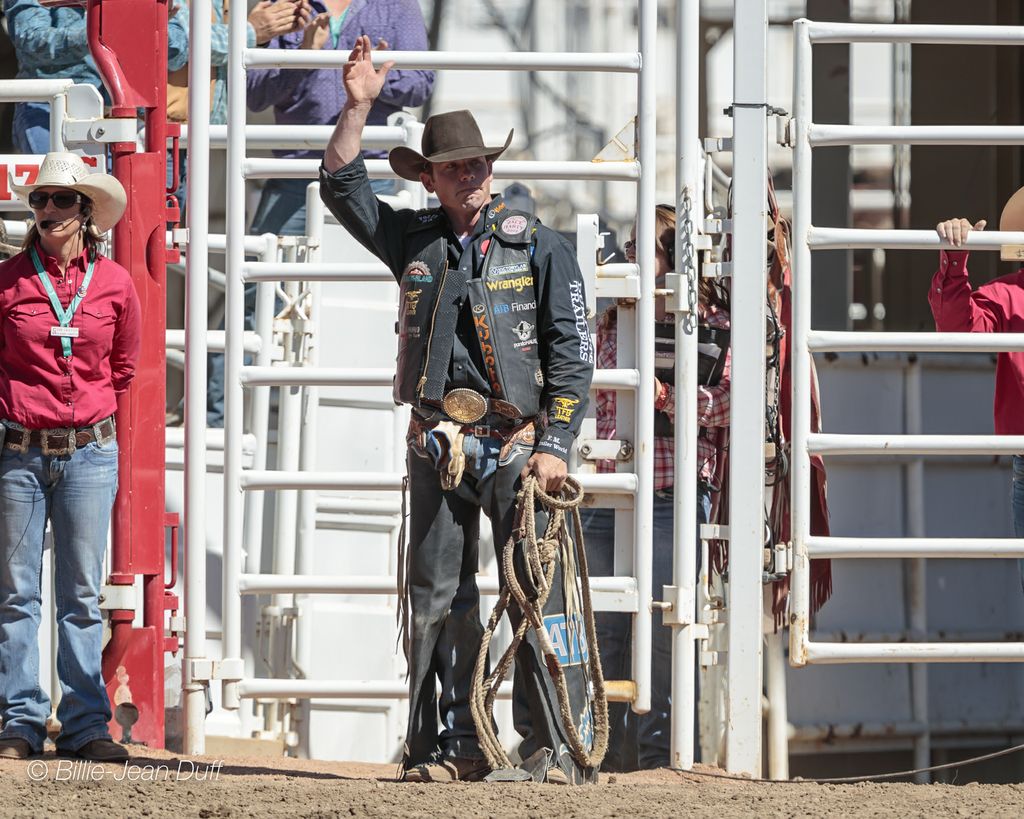