Centennial Trophy Saddles, elite hardware up for grabs in 2012

Centennial Trophy Saddles, elite hardware up for grabs in 2012

CALGARY – In an ironic twist, this trophy really lived up to its name last summer.

For the first time since it was introduced in 2009, the Calgary Stampede’s Elite Western Rider Award, presented by O’Connor Associates Environmental Inc., did not need to be sent out for engraving. During the 2011 Stampede, there was no winner of the Elite Western Rider Award — an annual salute to versatility in the saddle through the three Western Performance Horse events. 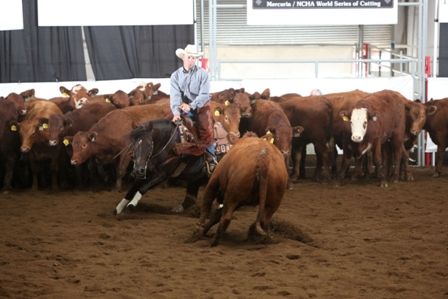 “By not having a winner last year, it sent out the message that this is a prestigious award. There’s a certain level of performance and versatility you need to attain,” notes Hans Kollewyn, who chairs the Stampede’s Western Performance Horse committee. “That, in itself, should inspire the riders who are going after the Elite Western Rider Award to step it up a notch this time around.”

Competitors earn points toward the title with Top-10 finishes in at least two of the three WPH events, with the winner receiving a handtooled Stampede buckle. Last year, it was close, but no cigar for a few title chasers. “If we want to reserve this award for a true elite rider, we needed to hold steady with our criteria, and that’s a minimum Top-10 finish in two events,” says Kollewyn. “There were one or two people in 11th place in their second event last year, but we didn’t want to water it down, so to speak.”

Calgary’s Ron Mathison was the inaugural winner of the Elite Western Rider Award in 2009, while Brad Pedersen of Lacombe, Alta., edged out the legendary Les Timmons of Kamloops, B.C., in 2010.

Changing gears and meeting the demands of the Stampede’s WPH events, each with their own distinct challenges, requires great dexterity in a rider, remarks Kollewyn.

“In Working Cow Horse, the horse and rider really need to be in tune for both the dry and the wet work, because it involves both a planned and spontaneous performance. In cutting, it’s like a tag-team effort — the rider singles out the cow, and the horse keeps that cow separate from the herd,” he says. “And in cattle penning, the team needs to go from a near-standstill, while separating the cow, to going full-tilt down the arena to get the three cows into the pen.”

Besides the Elite Western Rider Award, contestants in the Western Performance Horse events will be chasing another very special prize in 2012 during the Stampede’s 100-year birthday bash.

To commemorate the Stampede’s Centennial festivities, the Western Performance Horse committee will be awarding Centennial Trophy Saddles — handcrafted by world-renowned Vic Bennett Saddles of Sherwood Park, Alta. — to various champions in these three marquee events. It’s a once-in-a-lifetime opportunity, notes Kollewyn, and it’s expected to boost participation numbers across the board.

“We’re very proud to be able to offer these Centennial Trophy Saddles to our winners. We’ve never been able to offer trophy saddles in the past,” he says.

In all, there’ll be 25 Centennial Trophy Saddles awarded this year — 18 of them during the Stampede itself. Twelve will go to the team penning champions — teams of three in each of the Open Class, 14 Class, 10 Class, and 7 Class finals. Three more will be presented in cutting, for the Open, Non-Pro, and Youth category winners. Another three will be bestowed upon the winners of the Open Bridle, Open Hackamore, and Non-Pro Bridle classes in the Working Cow Horse Classic.

And the final seven will be presented in October during the Stampede’s annual fall Cutting Horse Futurity, presented by Wrangler — to the Open and Non-Pro champions in each of the Futurity, Derby, and Classic/Challenge categories, as well as the winner of the 7-Up Class.

This championship saddle program was made possible by using some of the proceeds of the Centennial Saddle program, which saw 100 identical, limited-edition Vic Bennett Custom All-Round Saddles sold to the public in the 18 months leading up to the 2012 Stampede. The Centennial Trophy Saddles maintain a similar theme to the Centennial Saddles, but will bear a distinct design and will be tailor-made for the disciplines of penning, working cow horse, and cutting. “Vic is going to be unable to have these trophy saddles ready for Stampede, but that turns out to be a really big bonus for the winners — because they’ll be able to specify their seat size, as opposed to something generic,” says Kollewyn.