Calgary – The TransAlta Grandstand Show - Century – is a fast-paced, music driven spectacular a hundred years in the making. Running nightly during the Calgary Stampede, July 6 to 15, the TransAlta Grandstand show has captured key moments from the Stampede’s past while infusing the show with a modern twist and contemporary flair. 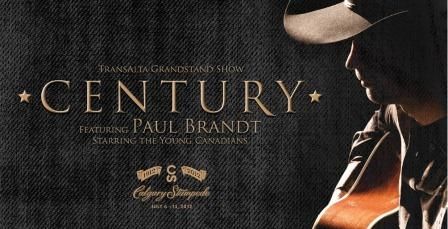 “Century – celebrating 100 years of cowboy music – extends the boundaries of the imagination and complements the oral storytelling tradition of the First Nations of Canada with a visual experience that will knock your boots off,” says Bill Avery, producer, Grandstand Show. “Century is an avant-garde multimedia performance that showcases the rich history of the Stampede.”

Headlined by Canadian country music superstar Paul Brandt, Century soars to new heights with Brandt flying high above the crowd performing the hits that have made him an international singing sensation. A terrific performer, Brandt will rock the country as never before.

Brandt, The Young Canadians of the Calgary Stampede and entertainers from Canada, Europe and Asia will amaze with chart-topping music and time honored art forms from around the world.

A blend of acro-lariat skills never before seen in North America before will be presented by the Jinan Acrobatic Troupe. Astonishing aerial acrobatics on bicycles will be performed by 12 talented young girls from The Hebei Acrobatic Troupe from Bejing; the Extreme Dream Team of high-jumping motorcycles will leap through the air and cross the entire stage; completing the aerial extravaganza, Pawel and Izabela from Poland will perform a mesmerizing aerial ballet that shows their love, trust and respect for each other.  From daring motorcycle tricks to astounding acrobatics on Icarian Bicycles, the artists’ performances are an ode to human effort in all its splendor and fragility.

The 72 minute journey through a century culminates in true Stampede fashion, with a climactic finale that includes a massive birthday cake on stage and the largest fireworks display in the history of Canada!

Since 1938, TransAlta and the Calgary Stampede have forged a strong partnership evolving from our shared values of commitment to community service, enterprising attitude and investing in the talent of our youth,” says Dawn Farrell, president & CEO of TransAlta. “Calgarians and visitors from around the world will be awed by how hard the Stampede and the Young Canadians of the Calgary Stampede have worked to showcase aCentury of success at TransAlta's Grandstand Show this year. Come, celebrate the Stampede's Centennial with us and enjoy the show!”