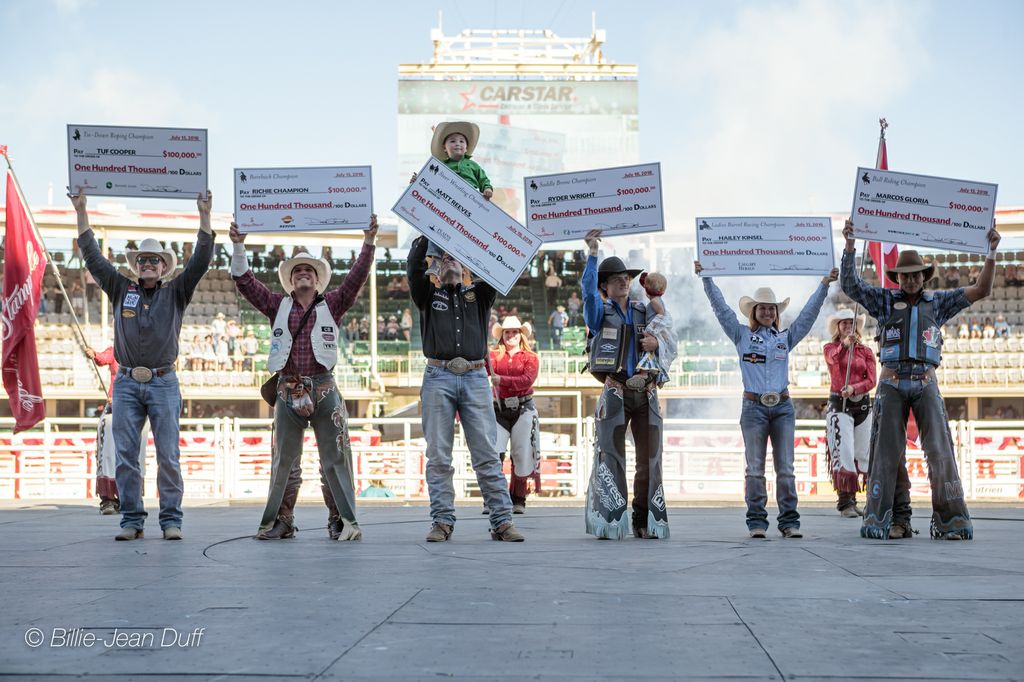 Showdown Sunday at the Calgary Stampede lived up to every inch of its world class reputation.

“He’s become a staple of my career in a short amount of time. You’re never comfortable with him. Every time you buck him you’re sorry you asked for him, but you’re excited all at the same time. I had to go with the same game plan I go at everything. To be able to win the Stampede twice now – my head’s spinning right now.” Airdrie’s Jake Vold, who travels with Champion and Caleb Bennett, was just a slim half-point behind in the Showdown, marking 92 for an impressive effort on Calgary’s Trail Dust, giving him $25,000. Clint Laye came in third place on Sunday, for a stellar 89.5 points on Special Delivery to win $15,000, while Clayton Biglow rounded out the Final Four with 86.5 on Onion Ring, for $10,000.

There was plenty of drama in the bull riding Showdown, when all four finalists failed to make the eight seconds on their bulls, and Marcos Gloria left in a world of hurt. But they reloaded the chutes, and tried again. Gloria came back and battled through the pain to become the only one who made a qualified ride on the second attempt, scratching out a 76 on the bull called Rattler to claim the massive $100,000 cheque and Stampede trophy bronze. The transplanted Brazilian who now lives in Edmonton was disappointed with his buck off on the first bull, Happy Camper.

“I wanted to win the round on that bull because it was a rematch. It’s one of the most rank bulls here, and I really wanted that,” Gloria stated in his native language of Portuguese. “But I’m glad that I had a second chance. I’m happy for everything. I’m very happy with the way everything turned out, for winning.” Gloria also thanked Portes, his friend and a retired bull rider, who brought him to Canada, and helped launch him in the bull riding sport here.

“It’s unbelievable. I’ve never seen anything this big. I love Canadians.” The other three finalists split the remainder of the Showdown pot. Ty Wallace, Joe Frost and Fabiano Vieira all went home with $16,667 each.

It pays to be fast, and in the case of Tuf Cooper, being fastest on Stampede Showdown Sunday pays very well. For the second time in his career, the Texas tie-down roper got his name on a giant cheque and collected another bronze, for roping his calf in a smooth 6.8 second run.

“It’s just a blessing to be here, said Cooper. "My name’s Tuf but I get my strength from the Lord. I’m so grateful to be here and Calgary and compete at one of the best rodeos of the year, in front of the best fans, on the biggest stage of rodeo. It’s something I’ll remember for the rest of my life.”

Cooper had to rope after watching his fellow statesman Caleb Smidt put down a 7.1 second run. Smidt cashed in for $25,000 for second, with another Texan, Timber Moore, getting $15,000 for his 8.5 second run. Kyle Lucas of Carstairs made it to the Final Four, and even though he missed his calf, he still goes home $10,000 richer.

The saddle bronc riding Showdown had some familiar faces and horses. In another repeat rematch, three-time Champion Zeke Thurston got to nod his head for Get Smart for the second year in a row. The Big Valley cowboy gave it everything and came up with 90 points, in his drive for a four-peat. But the kid from Milford, UT had been blowing out the 90 barrier all week long, and Sunday was no exception. Ryder Wright racked up 93 points on the Calgary horse Stampede Warrior to make the dash to the stage to get his first $100,000 bonus cheque at Calgary.

“It’s been an awesome week and I’ve been drawing really good, and I’m really fortunate to be here,” acknowledged the soft-spoken cowboy. “This is an awesome rodeo.” Thurston’s consolation prize for second is $25,000, while Cort Scheer picks up $15,000 for an 89.5 point ride on Wild Cherry, and Clay Elliott gets $10,000 after marking 84 on Timely Delivery.

It’s hard to outrun Hailey Kinsel and her horse Sister on any track, and the Calgary Stampede proved no exception. She and the phenomenal palomino kept getting faster all week long, and sped around the pattern in 17.078 seconds in the Showdown to earn the $100,000 payday, all in her first trip to Canada.

“Oh, it’s been awesome. We’ve had a lot of fun up here and my horse has loved it,” she smiled. “Canada’s been fun and the weather’s been good.” Because the Calgary rodeo earnings do count towards the WPRA standings, the win here sets Kinsel up well for the rest of the season. Finishing second in the barrel racing Showdown was Kelly Bruner, also of Texas, who gets $25,000 for her 17.106 second run. In third was Jessica Routier, with 17.256 for $15,000; and Lisa Lockhart, with a 17.272 for $10,000.

His wife Savannah already had a Calgary Stampede bronze from barrel racing in the living room at home in Cross Plains, TX, and that weighed a bit on Matt Reeves’ mind. So on Sunday, he did something about it.  Reeves got his steer to the ground in 4.7 seconds, which turned out to be the fastest of the Final Four in the Showdown round, giving him the $100,000.

“I guess it was my turn,” chuckled Reeves. “Because that wasn’t the best run I made all week. But it was sure the best paying run. It’s awesome. I really want to thank Dakota (Eldridge) for letting me ride Rusty, and J.D. Struxness is rodeoing with me, and he did a great job hazing for me. It’s been a great rodeo.”  Reeves is tickled he now has a bronze to put next to his wife’s. Finishing second was the 2017 winner Tyler Waguespack, but his 6.7 second run netted him $25,000; followed by Canadians Scott Guenthner, who broke a barrier to win, but still got $15,000; and Cody Cassidy, who collects $10,000. 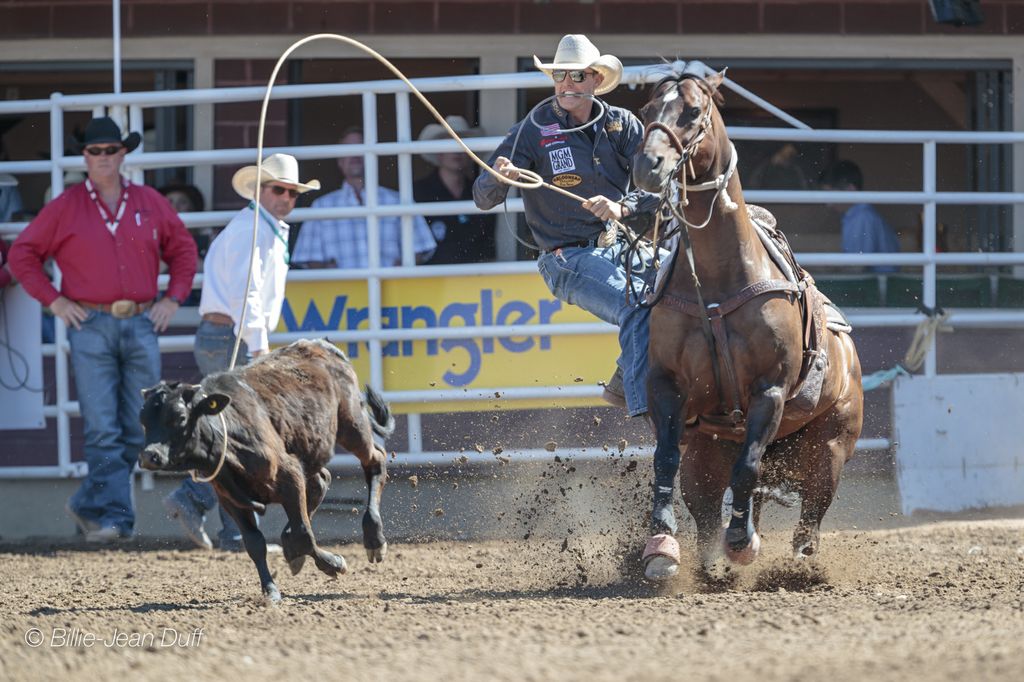 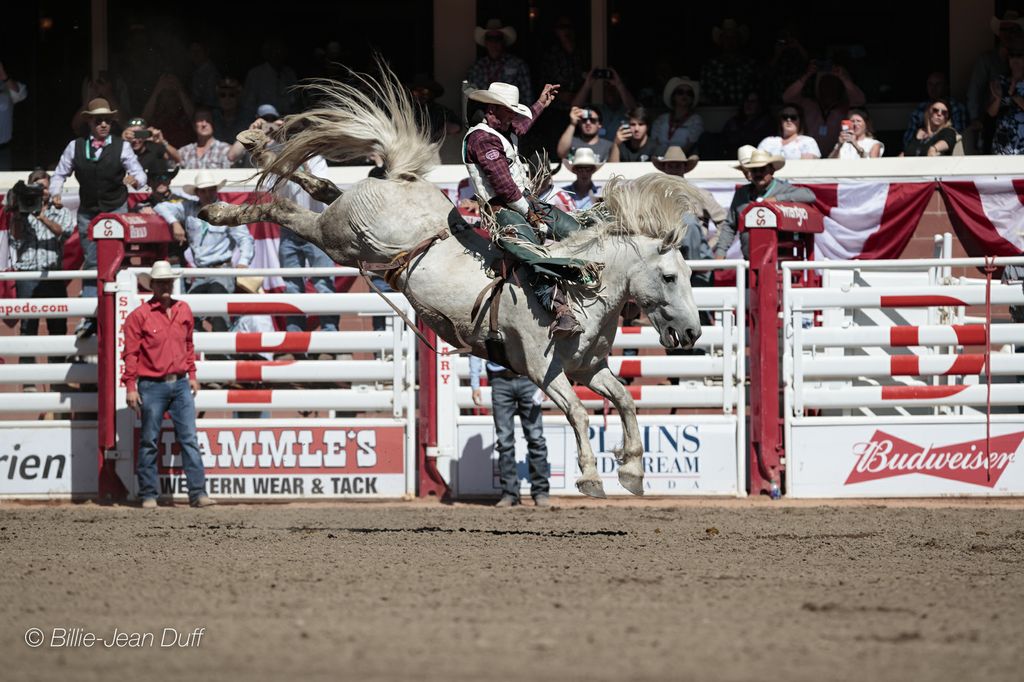 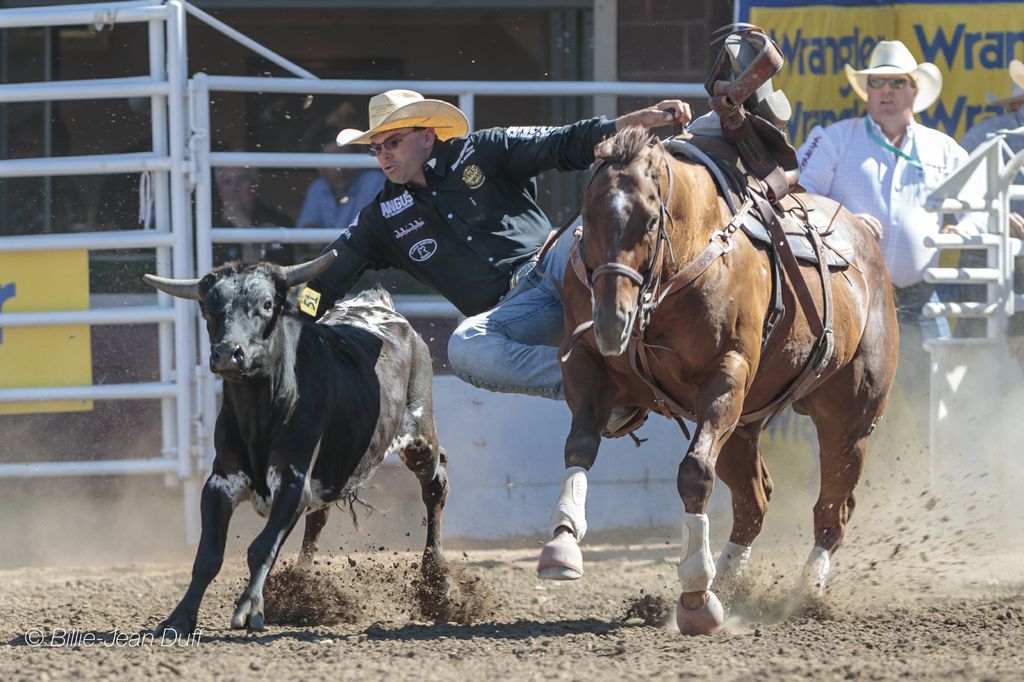 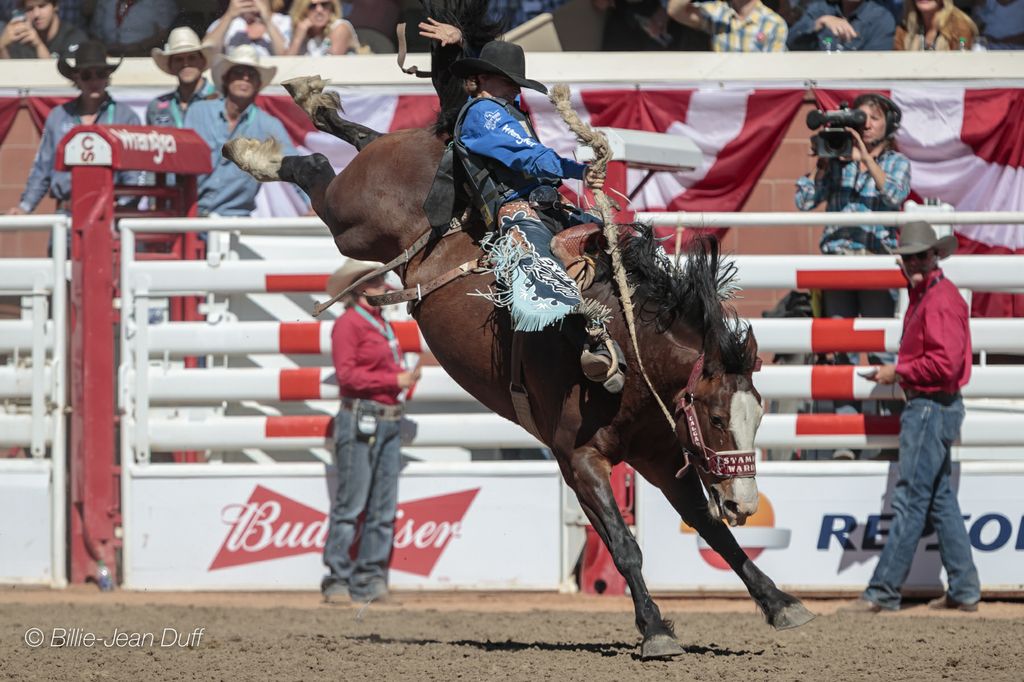 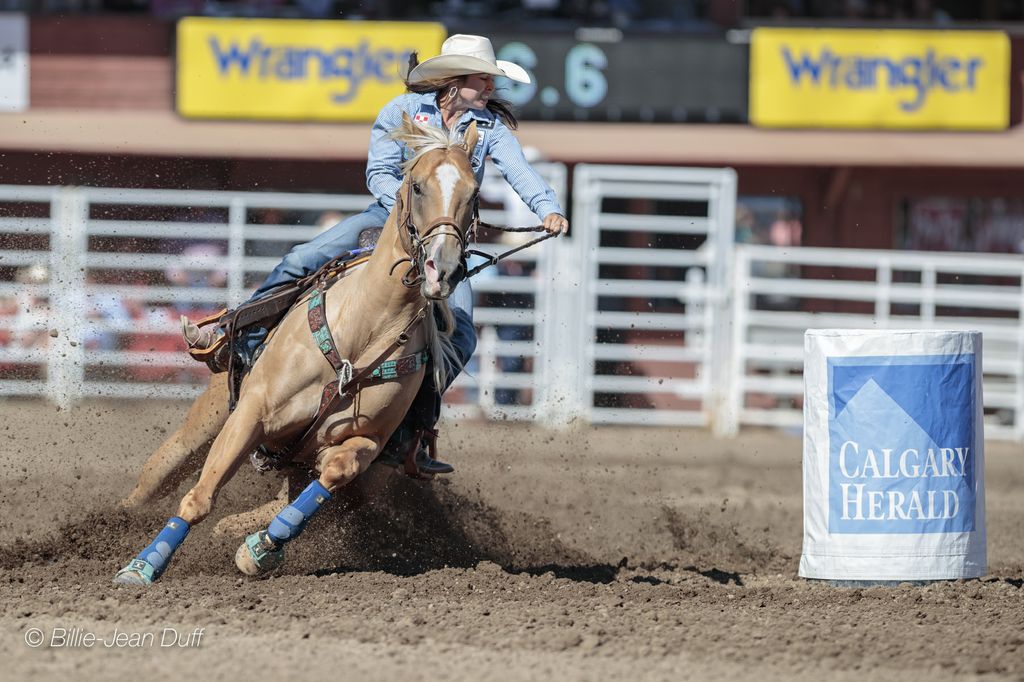 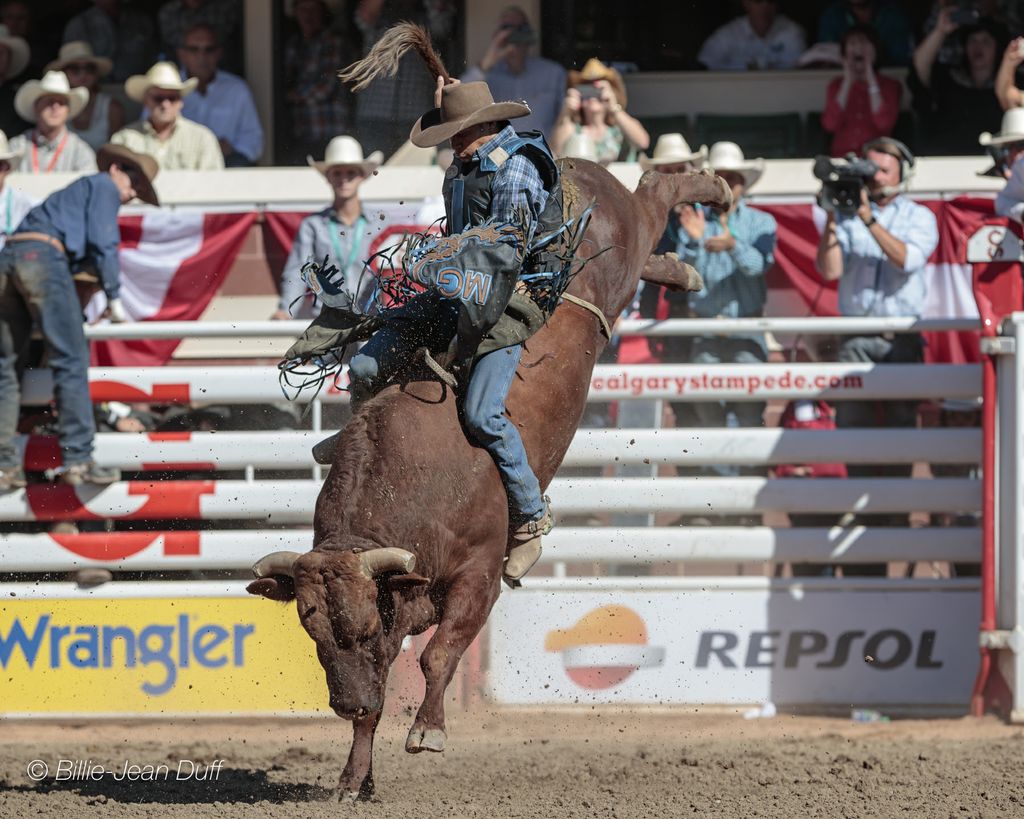