CALGARY – It was Fat City all over again for Chubby Turner.

A former world champion and National Cutting Horse Association (NCHA) Hall of Famer with more than $2 million in earnings to his credit, the 64-year-old Texan added to his long line of career cutting triumphs on Thursday evening – schooling the young pups under the Big Top en route to victory at the Calgary Stampede’s 40th annual Cutting Horse Competition. 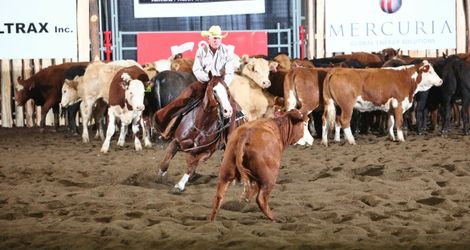 The tale of Turner’s second career Stampede cutting victory is decent enough, but it still can’t compare to the story of how this lean, wiry cowboy from Weatherford, Texas, was saddled with his nickname.

“I’m an only child, and I was born in southeast Oklahoma in my grandmother’s house,” said Turner, who’s also a lifetime director and past president of the NCHA. “The doctor come out and he said to my dad: ‘Harold, it’s a boy, and he’s a chubby little thing.’

Thursday’s 224-point performance by Turner and CD Boonsmal spelled victory in the Open class – as well as a cheque for $10,200. Carol Ward of Rancho Murieta, Calif., and Lil Dulce Lu repeated their Stampede success in the Non-Pro class, marking 220.5 points in Thursday’s final for an $8,725 pay day. And in the Youth category, 12-year-old Haylee Sleeman of Yelm, Wash., captured the Bill Collins Youth Excellence Award and a $1,500 scholarship for a two-round, two-day aggregate score of 426 aboard Kit Date, owned by Dustin and Marla Gonnet of Cayley, Alta.

Since 2009, the Stampede’s Cutting Horse Competition has been a participating event on the Mercuria/NCHA World Series of Cutting. Thanks to the involvement of the NCHA’s World Series, the Stampede’s cutting showdown featured $25,000 in added money in each of the Open and Non-Pro divisions.

Turner and CD Boonsmal – owned by Swiss-turned-Texan Daniel Jaeggi, the vice-president of tour sponsor Mercuria – shifted into overdrive Thursday night, deking and dodging, juking and jiving en route to their 224. The final five teams in the eight-team final couldn’t touch that mark; the closest was Josh Sleeman, Haylee’s dad, who posted a 220.5 aboard Ho Chi Minnie.

“He’s a really good horse, but sometimes he’ll be a little lackadaisical. I warmed him up back there, got him thinking,” said Turner, who’s been cutting for more than a half-century and won his first Stampede cutting title in 2004.

“I’m getting old, and sometimes I don’t cut the cows I really want to. But tonight I said, ‘OK, I want to be somebody.’ I stepped up and cut the three cows I wanted – which, for me, is pretty good for this age.”

Thanks in part to the Stampede’s 100th birthday bash, and those once-in-a-lifetime Centennial Trophy Saddles up for grabs, competitors arrived from as far away as the Lone Star State, the Apple State, Sweden, and Switzerland – with a total of 25 horse-and-rider teams entered in Open, and 48 more in Non-Pro. A total of just over $84,000 went up for grabs under the Big Top this week -- $36,500 in Open, $47,540 in Non-Pro.

Ward, meanwhile, is the daughter of Fred Anderson, who owned the former Sacramento Gold Miners franchise of the Canadian Football League – and Ward has been doing some pretty decent prospecting in Calgary recently. Last summer, she came through Alberta with Lil Dulce Lu on a hot streak – which would eventually take them all the way to the NCHA World Finals at Fort Worth, Texas, where the then-seven-year-old won Reserve Champion Mare in the Open class.

Ward, who is taking Lil Dulce Lu to selected World Series events this year, came out of the bottom of the order in the 12-team final to score a dramatic win, eclipsing Mary Jo Milner of Southlake, Texas, and Smooth Asa Zee, who’d earlier marked a 219.

“Last year, during our run-up to the worlds, about 60 per cent of the time I was in the second-to-last or last hole, so I’ve really gotten used to riding in the bottom, more than the top,” she said. “Sometimes going late is an advantage, because you get tougher cows. You know you’re going to cut something tough, and if you can hold ’em and make it look good, you’ll score better.

“I think it was an advantage for me tonight . . . I’d already seen what everybody else had done.”

Meanwhile, Haylee Sleeman was in for a surprise when she and her parents showed up at the Gonnet spread in Cayley about five days before The Greatest Outdoor Show on Earth.

“My dad’s good friends with the Gonnets. We stayed at their house . . . and this was all a coincidence, because I never expected to ride at all,” said Haylee, who’s been cutting since the age of six. “When I got there, they said: ‘We have this horse. Would you like to ride him?’ I said, ‘Well, sure.’ I just wanted the experience. First go-round, I thought that anything above 205 would be fantastic.”

The sport of cutting highlights the pure athleticism, instinct, agility and intelligence of the cutting horse. With horse-and-rider teams attempting to cut at least three individual cows out of a herd within 150 seconds, cutting has evolved into one of the most exciting equine events in North America.

The NCHA counts more than 20,000 members from a wide range of backgrounds, and sanctions more than 2,200 events across North America each year, with tens of millions of dollars in prize money awarded.

In 2011, the World Series went outside North America for the first time, setting up an October tour stop in Lyon, France; this year, the venerable Augusta Futurity in Augusta, Ga., was added to the eight-event World Series.