CALGARY – Every year, during the final weekend of the Calgary Stampede, Dale Clearwater is arguably the hardest-working man under the Big Top.

Clearwater’s just not sure that it qualifies as work. 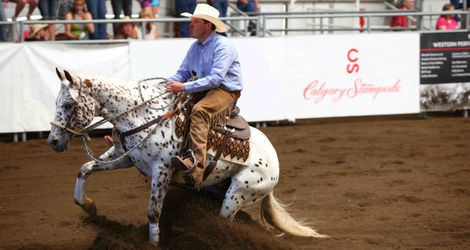 When July rolls around, the working cow horse trainer from Hanley, Sask., rounds up some of his best equine prospects, collects three energetic associates, and takes the Stampede’s Working Cow Horse Classic by storm. Last year, he entered four client-owned horses in the Open Hackamore division. The summer previous, it was five. Heck, in the fall of 2008, at a show in Nampa, Ida., a colleague broke his leg during the competition — and Clearwater shouldered that load too, showing nine horses in all on the final day of competition.

“Yeah, it’s a lot more work, obviously, but that’s something we never shy away from,” says Clearwater, 33, who also trains cutting horses at his Justabouta Ranch, approximately 70 kilometres south of Saskatoon. “Out here on the ranch, we’ve got cattle — we run about 400 yearlings — and we handle two sections of land. We’re always buildin’ and fencin’, and then riding 25 head of horses a day, on average.

“It’s almost a holiday, really, when we go to the shows — because that’s only for two or three hours. We make sure to go have some fun, too, because you’ve got to look after family life.”

As always, the Stampede’s Working Cow Horse Classic, presented by Tesla Exploration Ltd., will wrap up the Stampede’s trio of Western Performance Horse events — with the first go-round slated for Friday, July 13 under the Big Top, and the finale scheduled for Sunday, July 15 in the same venue.

The Stampede’s Working Cow Horse Classic, presented by Tesla Exploration Ltd., represents a tip of the Smithbilt hat to the tradition and heritage of the early 18th-century Spanish vaqueros in California; horse-and-rider teams are judged on their authority, discipline and precision in two distinct areas – reined work, or dry work, and cow work, otherwise known as fence work. Reined work, labeled “Western dressage” by some, is based on a predetermined pattern of manoeuvres, including figure-eights, straight runs, sliding stops and 360-degree spins. Cow work, the truly thrilling portion of the show, sees the horse-and-rider team first box a steer, then send it at full tilt along the fence, heading it off and turning it both ways, before finally circling it once in each direction in the centre of the arena.

The Working Cow Horse Classic’s first round of competition begins at noon on Friday, July 13, while the second and final go-round starts at 11 a.m. on Sunday, July 15.

Since hanging out his shingle in 2004, Clearwater has enjoyed plenty of success in recent years. He’s won the Snaffle Bit Futurity three times at the Canadian Supreme fall event in Red Deer, Alta. He qualified for the 2010 intermediate final at the National Reined Cow Horse Association’s (NRCHA) Snaffle Bit Futurity in Reno, Nev., a show that perennially draws more than 300 horse-and-rider teams. In 2008, he won the Limited and Intermediate Open classes, and placed third in the Open, aboard Another Smart Kid at the NRCHA’s Circle Y Ranch Derby at Stephenville, Texas.

As for the Stampede, Clearwater has been seriously knocking on the door for some time. Last year, he was runner-up, or reserve champion, in Open Hackamore aboard Smart Lil Double Pep, owned by Louise Allchurch. And in both of 2010 and 2009, he ended up tied for the reserve championship — on Smart Lil Double Pep in 2010, and Bobby Jo Rooster, owned by Dave Freeland, on 2009. “It’s just one of those things. It all depends on your cows, and how your horses are feeling,” shrugs Clearwater. “I’m always tickled just to be in the money, and to have more than one horse in the money makes my day.”

As for his travelling crew on the competition trail, Clearwater’s wife Teri is a mainstay who helps get the most out of the horses. “I put her to work. I crack the whip,” he says with a mischievous grin. “And any time she talks back, I say, ‘Hey . . . sounds good.’ ”

The Working Cow Horse Classic will also wrap up competition for the Stampede’s fourth annual Elite Western Rider Award, presented by Parsons, which goes to the top cowboy or cowgal competing in the three Western Performance Horse disciplines. All riders who take part in at least two of the events — including Calgary Stampede Team Cattle Penning Competition, presented by Calfrac Well Services, and the Calgary Stampede Cutting Horse Competition — are eligible for the champion’s buckle.