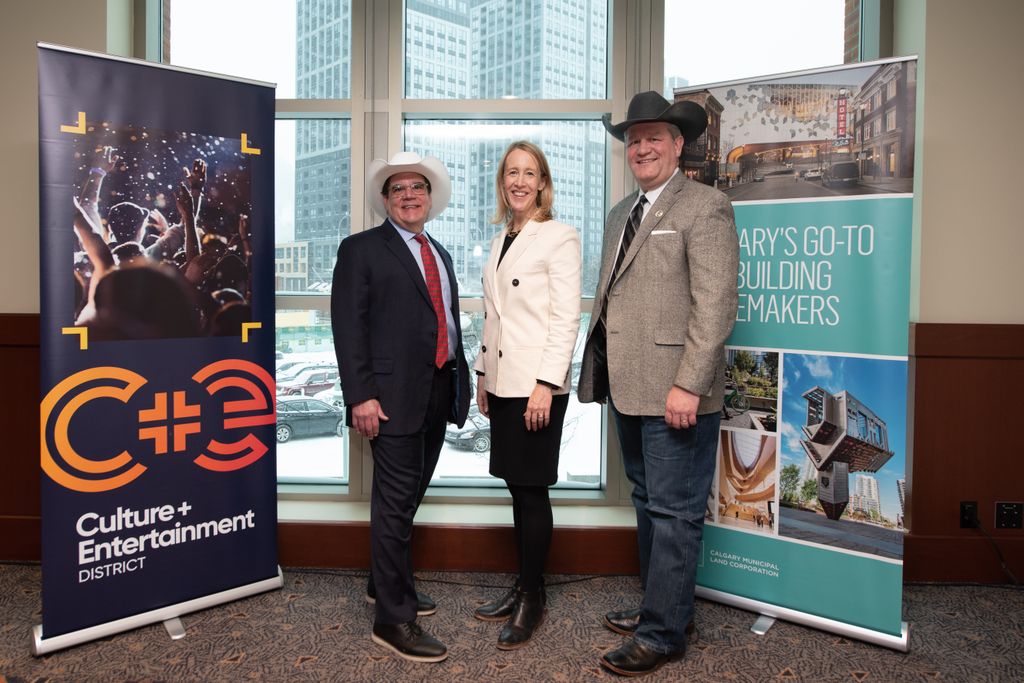 Calgary – Calgary Municipal Land Corporation (CMLC) and the Calgary Stampede are pleased to announce a joint partnership for the development of a new convention centre hotel that will complement the dramatic expansion of Calgary’s BMO Centre. The partnership, with full-service private real estate development company Matthews Southwest Hospitality (MSWH), will create the first hotel at Stampede Park and will connect an expected 220+ rooms directly to Western Canada’s largest convention venue. It also marks the first major private investment in Calgary’s Culture + Entertainment District since the master plan was completed in 2018.

“Today marks a major step forward in the development of the C+E District, and we are thrilled to be announcing our development agreement with Matthews Southwest Hospitality and our partners at the Calgary Stampede,” said Kate Thompson, CMLC’s President and CEO. “With the expansive construction on the BMO Centre moving along, we have been focused on securing a development partner to support the evolving needs of conventions and events in this area. Matthews Southwest Hospitality brings deep experience in hotel development befitting of the world-class convention venue it will sit adjacent to. This development agreement is a very positive indication of things to come, and just one example of how investment in the district, and in projects like the BMO Centre expansion, is already generating economic benefit and spurring further development in the area.”

Mayor Jyoti Gondek added, “The revitalization of the Rivers District has been underway since 2007, with a $396 million infrastructure build-out resulting in attraction of $3 billion in private sector investment. Today’s announcement is further proof that the market has confidence in Calgary and is interested in actively partnering to build a successful and memorable Culture + Entertainment District.”

The hotel site, a 31,000 sq. ft. parcel on the southwest intersection of Stampede Trail and 12 Ave S.E., is in a prime location in The Culture + Entertainment District, at the north entrance to Stampede Park and just steps away from the expanded BMO Centre, the Saddledome, Cowboys Casino and dozens of restaurants and retailers. The BMO Centre Convention Hotel will also front the redeveloped Stampede Trail which, when completed in 2024, will serve as a vibrant retail and commercial corridor, a multi-modal connector and, for special events, a pedestrian-only space.

In partnership with the Calgary Stampede, CMLC issued an expression of interest for a hotel development in 2019, and MSWH was selected as the preferred hotel partner. Since that time, CMLC has completed feasibility studies, site analysis and land use amendments to ensure the hotel is developed in alignment with the needs of Western Canada’s largest convention venue.

Next steps on the approximately $80 million dollar development will involve a comprehensive design stage to plan its thoughtful integration into the District and physical connection to the BMO Centre. The hotel is being planned as a 4-4.5 diamond boutique lifestyle hotel offering with a minimum of 220 rooms, four food and beverage offerings, and expanded amenities including a fitness centre and 11,000 sq. ft. of meeting space to support the needs of convention goers and visitors alike. The prime site also allows for the hotel to be developed with direct interior connection into the BMO Centre.

“A best-in-class venue like our expanded BMO Centre will be well supported by a hotel of this caliber, with premium amenities and unique product offerings directly aligned with our renowned Stampede hospitality,” said Joel Cowley, Calgary Stampede’s CEO. “As we prepare to welcome the world to Western Canada’s largest convention venue in 2024, we look forward to working with CMLC and Matthews Southwest Hospitality to realize the vision for this important addition to Stampede Park.”

As experienced upscale hotel developers, Matthews Southwest Hospitality has a proven track record of developing successful convention center headquarter hotels within urban cities, including their successful delivery of the Omni Dallas Convention Center Hotel and the W Element Convention Center Hotel in Philadelphia, as well as the Bow Tower in Calgary. Matthews Southwest Hospitality has proven expertise and capacity in designing hotels with a lens toward sustainability, functionality, connectivity and activation that contributes to successful projects during both design and construction phases.

“The vision for this area grabbed our attention from the very beginning and we look forward to applying our experience and expertise in convention hotel developments to this exciting and evolving district in Calgary,” said Mike Garcia, President of Matthews Southwest Hospitality. “Along with our architectural partner Nunzio Marc DeSantis Architects, we are excited to create a unique hospitality experience and design a hotel that fits the dynamic district vision and complements this world-class, year-round gathering place.”

Moving forward the team will advance the project into the design, financing and permitting phases. As part of that process, a hotel brand flag will be selected. Construction on the hotel is anticipated to begin in 2024.

The Calgary Stampede celebrates the people, the animals, the land, the traditions and the values that make up the unique spirit of the west. The Calgary Stampede contributes to the quality of life in Calgary and southern Alberta through our world-renowned Stampede, year-round facilities, western events and several youth and agriculture programs. Exemplifying the theme, We’re Greatest Together, we are a volunteer-supported, not-for-profit community organization that preserves and celebrates our western heritage, cultures and community spirit. All revenue is reinvested into Calgary Stampede programs and facilities. calgarystampede.com

About CMLC
Created and owned by the City of Calgary, Calgary Municipal Land Corporation (CMLC) exists to achieve the City's objectives for urban densification and community renewal, infrastructure investment and placemaking. As the master developer behind Calgary’s East Village and new Culture + Entertainment District, CMLC is leading over $1 billion in city-building projects and is the project lead on pillar projects in Calgary including the Arts Commons Transformation, BMO Centre Expansion and the 17th Ave SE Extension and Victoria Park/Stampede LRT Station Rebuild. calgarymlc.ca

About Matthews Southwest Hospitality
Established in 1993, Matthews Southwest (MSW) is a privately held full-service real estate company that has acquired, built and managed the development of hotel, office, mixed-use retail, residential and industrial developments. Matthews Southwest Hospitality, LLC (MSWH) was formed in 2017 to lead the growing hospitality efforts for MSW. MSWH focuses its efforts on new and value-added developments, asset management and deploying MSW capital in selected hospitality opportunities. MSW/MSWH is in the process of developing more than 8 million square feet of hospitality, office, residential and mixed-use retail developments throughout North America. MSW is comprised of 130 affiliated companies in the U.S. and 38 in Canada and controls more than $400M of real estate and currently manages over $2B in completed and construction projects. MSWH is headquartered in Dallas-Fort Worth and has offices in Lewisville, Texas, Toronto and Dubai. From conception to completion, MSW/MSWH bring together financial resources and experienced management focused on creating projects of lasting excellence and long-term value. For more information, visit matthewssouthwest.com. 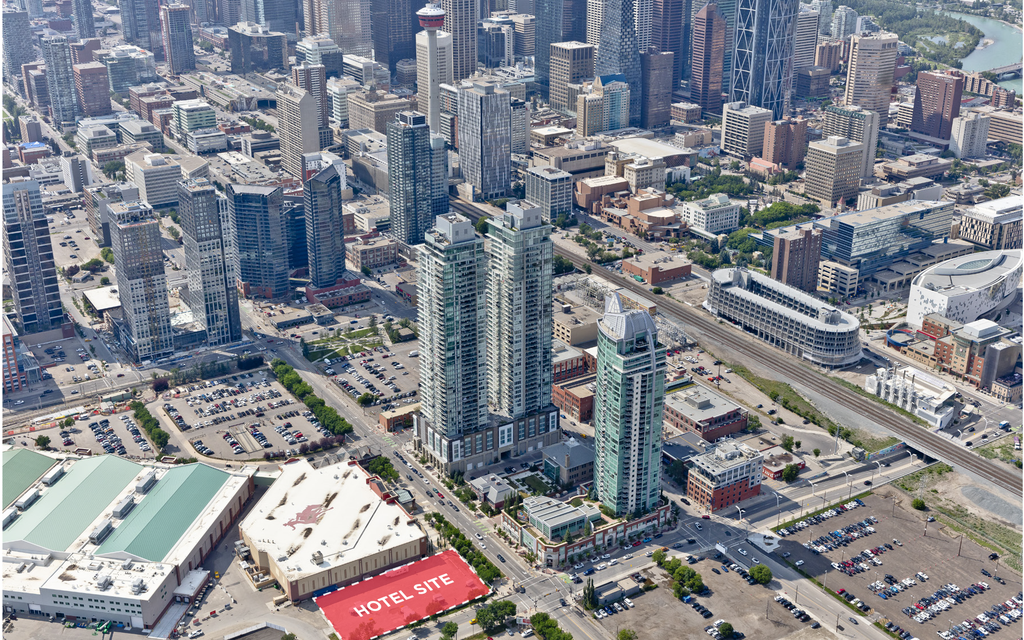 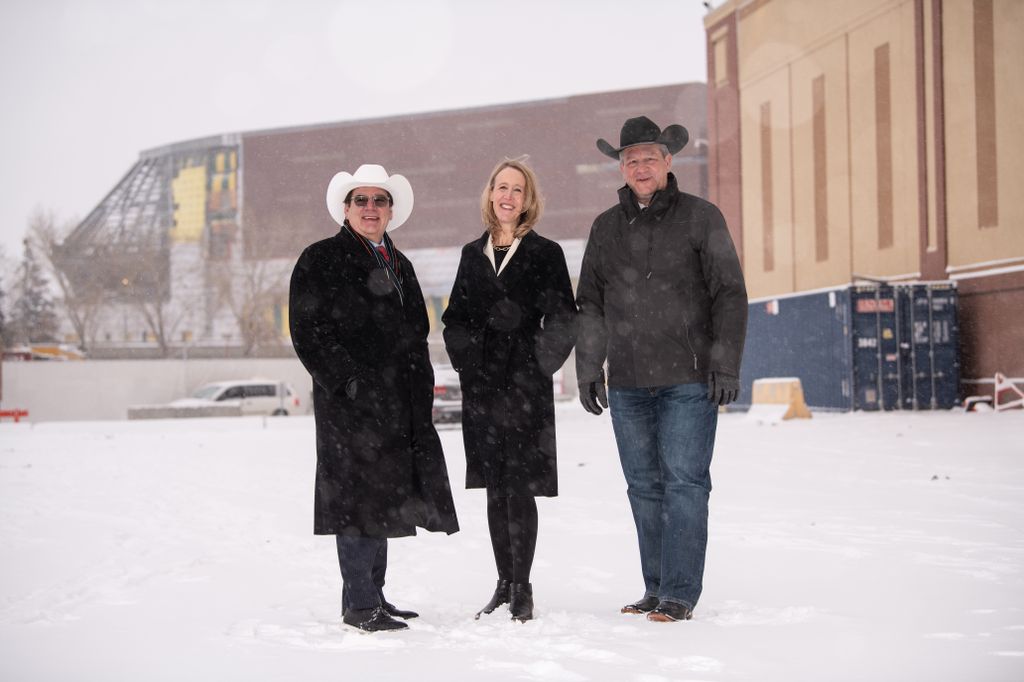