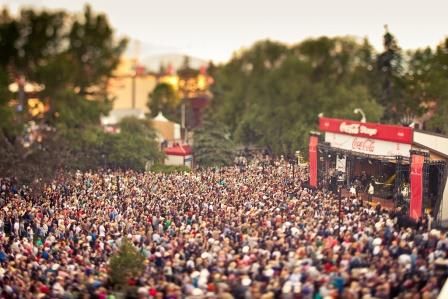 Calgary - Hundreds of excited music fans packed Flames Central on Thursday night for the anticipated announcement of who will be rocking the Coca-Cola Stage at this years’ Calgary Stampede. The fifth annual Coca-Cola Covert Concert featured exclusive performances by Said the Whale and Tokyo Police Club – just two of the headline acts that will be a part of the stage lineup this July.

“This year’s incredible lineup on the Coca-Cola Stage is jam-packed with artists from all over North America who are blowing up the music scene,” says Lindsay Ell, production manager. “From indie and pop to hip-hop, country and rock, there is an artist on this stage for absolutely every music fan.”

Some of the chart-topping, award-winning bands lighting up the stage this year are: Classified, winning the 2013 Juno Award for Rap Recording of the Year with Inner Ninja; A Great Big World, the latest American sensation who exploded onto the scene this year with their hit Say Something featuring Christina Aguilera; and 2013 Juno Group of the Year, Marianas Trench.

The Coca-Cola Stage has become a true destination for music lovers from Calgary and beyond. With an incredible lineup of diverse genres and a distinct focus on supporting Canadian talent, the Coca-Cola Stage is an integral part of the Calgary Stampede, and its reputation for being one of Canada’s largest music festivals.

Coca-Cola has been a long-time sponsor of the Calgary Stampede. In addition to its support of the Coca-Cola stage, the official beverage company of the Stampede also supports two entry offers, click here for more details.

Concerts on the Coca-Cola Stage and Nashville North are free with admission to Stampede Park. All performances take place at 9 p.m. with the exception of Chad Brownlee at 8 p.m. (July 11) and Dallas Smith at 9:30 p.m. (July 11).  For more information and a full schedule, visit www.calgarystampede.com.