Calgary - The Calgary Stampede announced the 2013 Coca-Cola Stage lineup to over 1,000 of music super-fans who packed Flames Central tonight to hear who will be playing their favourite stage. Two of this year’s acts, Dean Brody and Down with Webster, put on exclusive performances to warm up the crowd for what is one of the most exciting and diverse lineups ever for the Coca-Cola Stage. 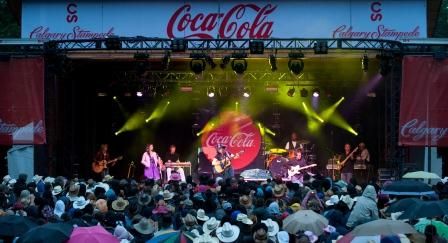 “As one of Canada’s largest music festivals, we’ve got an amazing lineup this year on the Coca-Cola Stage with musical talent with a wide range of appeal,” says Paul Rosenberg, programming vice-president.  “We have everything from local sensation Michael Bernard Fitzgerald, to legendary Canadian rockers Big Wreck, electro-pop artists Anjulie, and Dragonette and of course, we having something for the country music fans with Corb Lund and Dean Brody.”

Some of the big names joining these performers are Hedley, Sam Roberts Band, k-os, and YouTube sensation Walk Off The Earth.