Competitors get ready to run at the Calgary Barrel Classic 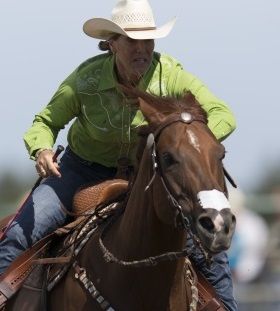 Competitors get ready to run at the Calgary Barrel Classic

Calgary – Hundreds of barrel racers from across Canada and the United States are making their final preparations for an exciting weekend of competition at the Calgary Barrel Classic. The Calgary Stampede’s Agrium Western Event Centre plays host to the brand new event, September 26-27.

This free, family event will showcase the excitement of barrel racing throughout the weekend, with a spotlight on the action set for Saturday night. Beginning at 6:30 pm, the first ever Canadian qualifier for The American will be held. As the world’s richest one-day rodeo, The American offers competitors a chance at winning $1 million.

The Calgary Barrel Classic was chosen from more than 200 applicants looking to host the qualifier, and the Agrium Centre was a strong selling feature.

“The Calgary Stampede has built this beautiful, world-class facility on Stampede Park,” says organizer and Calgary Stampede Board Director, Toni Dixon. “This event will be the first major barrel race to be held in this state-of-the-art building.”

More than 400 barrel racers from at least five provinces and four states are registered to run this weekend. Seventy two will compete in the qualifier for The American.

“I think there’s a huge buzz in the barrel racing industry,” Dixon says about the event, adding she wanted to make sure Canadians had a chance to qualify on home soil.  Currently sitting sixth in the Canadian standings, Dixon is herself set to race this weekend and is encouraging Calgarians to come down and check out the action. “Barrel racing is high powered horses, fast action and it’s fun to watch.”

The Calgary Stampede is proud to sponsor this exciting new competition, and admission to the Agrium Western Event Centre for the Calgary Barrel Classic is complimentary.