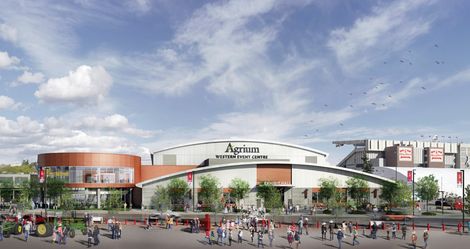 For more than a century, Stampede Park has served as one of the most important gathering places for competitions, agricultural events, entertainment and activities.

The construction of the Agrium Western Event Centre furthers the rich tradition of agriculture and is a significant step in the Calgary Stampede becoming a year-round gathering place.

The Agrium Western Event Centre will be at the heart of Stampede Park and the Agriculture Zone. The largest facility of its kind in Canada, it will be one of the most significant infrastructure projects in Stampede history. At 150,000 square feet the facility will dramatically increase the available agriculture space for holding year-round events at Stampede Park. Events are currently hosted from spring until fall, and this year-round arena will expand the number and type of events offered in Calgary.

The Governments of Canada and The Government of Alberta each committed up to $25 million toward the revitalization of agriculture buildings on Stampede Park, for which the total overall cost is $60 million. Most of this amount is dedicated to the construction of the new Agrium Western Event Centre, on which construction is set to begin shortly after this year’s Stampede.

Of the federal commitment under the Building Canada Fund, approximately $18 million was allocated to the Agrium Western Event Centre, for which the total cost is $42.6 million. Remaining funds were allocated toward renovations to the Agricultural building ($2.3 million), livestock access space and other associated costs.

Private donors and other corporations have also contributed to the Agriculture Discovery Zone and the Agrium Western Event Centre, and many are Stampede volunteers: